Irony and the Tory MP #eastleigh

One of the funniest moments of yesterday was listening to Tory MP George Hollingberry talk about how refreshing it was to have politicians who spoke their mind. "Do you want to have robocandidate?" he said.

And he said it without a trace of irony, too.

Who would have thought his comments came as part of the Eastleigh by-election hustings on Radio 5 Live? Here he was, replacing the party's actual candidate in the by-election, Maria Hutchings. Why on earth would the Tories replace a loose cannon of a candidate who has criticised state education with an on-message Cameron crony? Her minders have form for keeping her as far away from the press as possible as Mark Pack reported the other day, for what appear to be obvious reasons. She's not been called the Tories' Sarah Palin for nothing.

This poster was seen circulating round social media yesterday morning and I thought it was worth putting it on here for posterity. 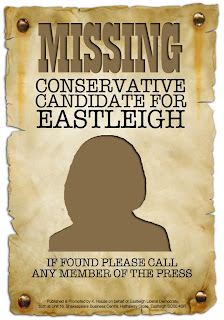 Mike Thornton, the Liberal Democrat candidate, made some excellent points during the hustings, despite being rudely interrupted by host Victoria Derbyshire on numerous occasions, even during his closing statement.

He was very clear that he thought Chris Huhne should apologise for the wrong that he's done. He was very good on both local and national issues, talking about how he had consistently opposed the gravel pits and voted for one responsible and needed housing development in order to save the green space between the towns and villages. He talked about how youth unemployment in Eastleigh had gone down by 20% and how 2100 apprentices had been created in the constituency. He emphasised the tax cuts for ordinary people secured by the Liberal Democrats.

If you have some spare time this weekend, please use it to help Mike Thornton to become Eastleigh's next MP. Wherever you live, you can make a difference to the campaign, whether by phonebanking (which Scottish Liberal Democrats will be doing in Edinburgh tomorrow, or by travelling to Eastleigh and helping deliver leaflets or knock on doors. All the information you need is here.
Posted by Unknown at 1:06 pm

Apparently...she said that she was meeting Cameron at some factory in the constituency... as if that couldn't been put off. Even if it couldn't it was bad planning and the hustings should have been far more important.

She irritated me enormously when she excused herself, saying that she had had the enormous honour of meeting the prime minister, like he was some sort of god.

Seeing as she is off message on the EU, Equal marriage, State Education and Immigration, I have to wonder why she was selected.

I heard her being interviewed by last week and she was embarrassingly bad.

Added to that you have Pickles running around making a boob every time he opens his mouth.

Everything the Tories touch turned to dust. Inverse Midas complex.