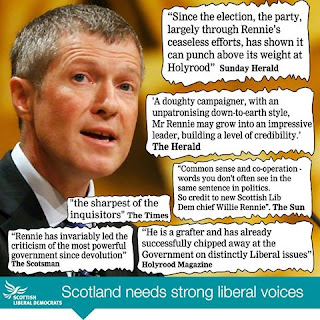 It's two years today since Willie Rennie was elected Scottish Liberal Democrat leader. It's sunny today, as it was then. I remarked at the time that 17th May was the first day it hadn't rained since the SNP had won their overall majority.

Here are some of the highlights of his first two years in the job:

The first interview - I was there in North Queensferry when he kicked off his leadership in the sunshine. At that point it had rained every day since the Nationalists had won their overall majority.

He was soon calling out Alex Salmond for attacking a senior Supreme Court judge.

And being praised by journalists.

Then he spent 24 hours with carer Clare Lally - and he still keeps in touch with her and her family.

Standing up against the SNP's illiberal bill to tackle sectarianism.

Standing up to the Catholic Church's threats on equal marriage.

Urging Alex Salmond to meet the Dalai Lama instead of pandering to the Chinese Government. Not to mention meeting the Dalai Lama himself and subsequently sending him a DVD of the Reverend I M Jolly to explain the meaning of the word "dour"!

Making Salmond squirm over the First Minister's pandering to Murdoch.

I have a feeling he won't be on Donald Trump's Christmas Card list any time soon.

His successful fight for extra college funding secured praise from the NUS of all people.

Now, he's fighting for Scotland's poorest two year olds to get 15 hours of nursery a week to give them the best start in life.


In two years, he's travelled the length and breadth of Scotland many times over to enthuse and motivate activists. He's stood up to vested interests trying to wield more than their fair share of power at others' expense. He's fought for children and young people and tried to focus thinking on the serious issues facing Scotland. No, that's not the independence referendum, it's caring for an aging population and reducing poverty.
Posted by Unknown at 4:05 pm

Oh come on you are not being serious Caron that this ex bag carrier for Clegg has any creditability.

The man who who demonised Salmond with that picture in the desert and then we have Willie admiring this company who supply arms to Saudi Arabia "But what can you do eh!"

Now he is defending UKIP because he sees it as a way of getting himself named in the papers which is what nonentities do.

Did you watch that debate between Nicola Sturgeon and Michael Mooore on STV as it was fascinating to show that that scaremongering is the only weapon that Better Together has and even they have refused UKIP 'help' in that failing venture.

Mind you even Labour have gone alone with United with Labour I wonder why they are not better together, utterly confused voter.

Look forward to your insightful analysis of this paradox of being better together yet better apart! Does Willie have the answer? We need to know.

p.s. Sorry to dominate your blog but it could be the difference between dependence or independence. ;)