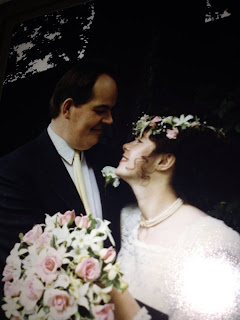 I can scarcely believe that a whole quarter of a century has elapsed.

I was incredibly lucky to find, while still (only just) a teenager, a loving life partner with kindness, patience, wit and tolerance sufficient to cope with the position of the Liberal Democrats in our lives. Thanks, Bob.

My sister made us laugh on our wedding day. At the age of 13, she was bridesmaid, and was knocking back what she apparently thought were glasses of orange juice and were in fact Buck's Fizz, which enabled her to share some of her delightful joke collection with us.

She made us laugh today, too - and may this act as a warning to all of you to check before you click on those online card sites: 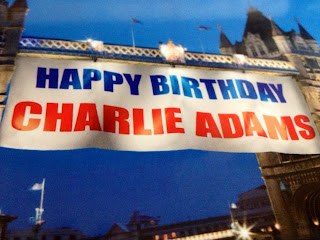 We knew she'd made a mistake because we got an accompanying postcard: 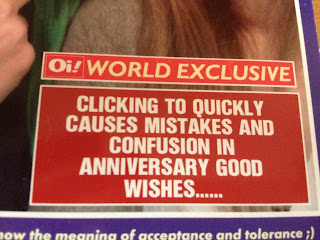 We are heading in to Edinburgh for a mooch round the Festival while Anna's at school and then this evening, we are going here for a very posh meal.

I should also add that it was lovely that the first person to send us congratulations via Twitter this morning was Lynne Featherstone. She, of course, laid the foundations for the same sex marriage bill and in 2039, there will be couples celebrating the 25th anniversary of their marriage thanks to her.

A few weeks ago, we were discussing with some Liberal Youth types what the world was like when we got married. They raised their eyebrows at a world where there were no mobile phones, no internet and only 4 tv channels. In turn, we raised our eyebrows when Bob's Auntie Patsy told us how in 1952, the year she got married, running water and electricity was installed at the highland farm house where she grew up.

Now, I certainly don't want to put any pressure on the lady, but it would be just a little bit cool if Tian Tian could do the honours today.....

Last year, we went to church to stand in solidarity against the Catholic Church's day of rage against equal marriage.

Three years ago, I was talking Kylie

Our marriage seems to have outlasted the You Tube accounts I featured in this post four years ago.

And five years ago, a post on what a completely rubbish wife I am. Nothing's changed in that time...