It's all kicking off in Calderdale...aka how to beat your Labour opposition in 140 characters 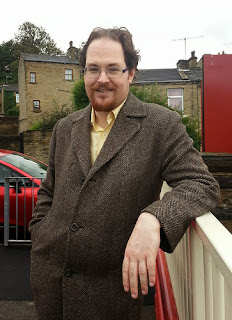 Recently, Alisdair Calder McGregor was selected as the Liberal Democrat Candidate for Calder Valley. His articles on Liberal Democrat Voice on the energy price freeze and the living wage have been widely read and well received.

Last night, he ended up having a Twitter conversation with his Labour opposition and the excellent Jennie Rigg made a Storify thingy. BTW, I have shamelessly nicked the photo of Alisdair form her blog. I hope she doesn't mind.

The reason I'm putting her Storify thing up is because I think we can sometimes be a bit too timid around Labour people. Remember this is the party who started an illegal war, introduced control orders, wanted to lock people up for 3 months without charge, whose Chancellor knew fine they'd have to raise VAT if they'd won the election, who wanted to have us arrested for taking photos of buildings and profiled as potential terrorists if we had a vegetarian meal on a plain. Oh, and they left us with no money and thought it was ok to leave a letter bragging about it.

Alisdair sliced through all of that, explaining what liberalism was all about to him and how we had not much time for either authoritarian party.

Read, enjoy, remember. We need to be doing this sort of thing a lot more in the next 18 months. Or 17.5 months.