F1: He's Back - Michael Schumacher and Ross Brawn together again

You may remember that I got a tiny bit excited in the Summer when Michael Schumacher announced his albeit short lived return to F1. Unfortunately, that didn't come to fruition because of his neck injury at the time, but that episode clearly poured fuel on that one smouldering ember of passion for being a full time racing driver. I guess it's a bit like being thrown back into an election campaign at full pelt having sworn you'd never do it again because the last one nearly killed you. That passion and drive never really leaves. It might occasionally hide, but it'll always be there. 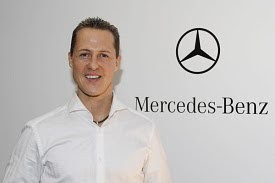 Today, he threw his hat into the ring for next season, not with the team that's been his home since 1996 and where he was a consultant, often seen at Grands Prix, but with the genius who guided him to his seven world titles, Ross Brawn, who is now team principal of Mercedes GP. I guess for a man who last year saved the doomed Honda team at 59 minutes past the eleventh hour and then led it to victory in both drivers' and constructors' championship, luring the best racing driver of all time out of retirement is child's play.

Some of the translation in this statement from his official website is a little weird but I have to say it brought a bit of a tear to my eye. The passion he has for the sport just jumps out and grabs you by the throat.

The BBC got an exclusive interview with him which you can watch here. He's on sparkling form. I do think, though, that Mercedes really ought to get some new microphones because the one he's holding looks very silly.

Much of the excitement and drama of this year's F1 season has taken place off the track, with the threat of a breakaway series, the stooshie over the future of the British Grand Prix and the scandal of Crashgate. Next season we are promised a treat on the road. By the time we got to Abu Dhabi in November, Brawn, Red Bull, Ferrari and McLaren were all up there with similar cars. Qualifying session thrillers, going down to thousandths of a second on the last flying lap were commonplace. Now Mercedes have given themselves an ace by reviving the best driver/strategist combination in F1.

There's always the risk that it won't be as good. I can't imagine the working relationship between Brawn and Schumacher changing though. The two of them trust each other implicitly and work very well together. Schumi really has nothing to prove, though. He's won seven world titles. He is one of the best drivers there has ever been, if not the best. He will still have all of that and maybe even more titles to his name. He will simply take the car he's given and push it to the absolute limit of its being. It's what he does.

I don't see why he shouldn't be whip the backsides of Jenson Button and Lewis Hamilton at McLaren, Vettel and Webber at Red Bull and Alonso and Massa at Ferrari. I doubt any team will get off to the commanding lead that Brawn and Jenson Button created last year though so I think it'll be thrilling. Schumi's also older and a lot wiser than he was 15 years ago.

You can hear Ross Brawn talking about his view of it all here.

I think what worries me is that the tabloid press is going to try and get up a frenzy of hatred towards him. They'll paint Mercedes as the German team, despite it being based in Britain and run autonomously by an Englishman, and McLaren (with its German Mercedes engines) as the British team and we all now how rational they can be when they do that. It's all going to be one spiteful yawn.

Anyway, I'll be supporting Schumacher and Ross Brawn all the way. And of course, Mercedes announced this week that the worlds of F1 and Harry Potter will combine as they now have a patronus. Oh, wait.......
Posted by Unknown at 6:00 pm

McLaren should paint their cars British Racing Green and put an RAF roundel on the front. Only joking :-)

The decision of Schumi to comeback is not good and he will be ruining his career.