Call this a Scottish breakfast, John Lewis? What are you thinking?

So, it's the first day in post apocalyptic Britain. We all seem to have survived the end of the world, so we can now look forward to a bright future, where we're all nice to each other, live in peace and harmony, make sure everyone on the planet has enough to eat and somewhere decent to live? We're going to take better care of the world around us? Sure we are.

But first, a little rant. Because this is important, obviously.

My friend Andrew Brown, known to you as @oneexwidow on Twitter, and author of The Widow's World is, as I write, tucking into what is laughingly described as a Scottish Breakfast, at John Lewis in Edinburgh. I say laughingly, because, look at this... 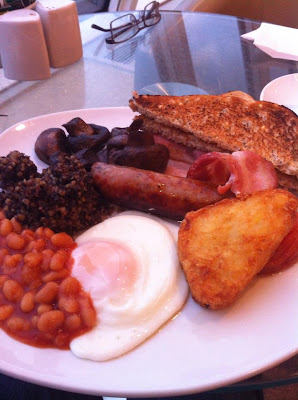 How can you possibly have a Scottish Breakfast with no tattie scone? It's a scandal! An outrage!

For those of you not from Scotland, the tattie scone is, in my opinion, one of our finest examples of Scottish fayre. A warm potato flatbread, a little bit salty, to soak up the egg yolk and give you an early morning carby hit is unmissable. And John Lewis is cheating its customers by offering a boring old hash brown.

A couple of miles away, in the Grosvenor Hilton at the West End, another friend of mine was simultaneously sitting down to a breakfast which did include a tattie scone. If one of the biggest US based multi-national hotel chains in the world can adapt its menus to cater for Scottish tastes, so can one of our iconic Princes Street stores.

Andrew has kindly allowed me to share his photograph of the offending breakfast with you all and has said that he will be sending a strongly worded letter of complaint. How serious he is,  I can't be sure.. I added that I wanted to see it debated in Parliament, but the last word goes to our lovely elephant's Daddy Richard who suggests a debate at Liberal Democrat conference, complete with tasting samples. Given that said Conference is happening in Glasgow in September next year, I'm sure that can be arranged....

But, seriously, John Lewis, sort your lives out. Give us some tattie scones. Please.

Like calling an Ulster breakfast one with out the Tayta Farl and Soda Bread.