Well, it's not every day you get to see the star of one of your favourite tv shows of all time just a few feet in front of you.

And here she is, resplendent in tartan, with her glasses on her head: 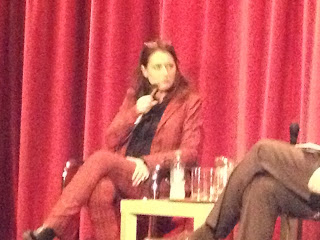 Sidse Babett Knudsen, the actress who plays Birgitte Nyborg, the Danish Prime Minister in the political drama Borgen was in Edinburgh today to promote the DVD boxset of the first two seasons of the programme.

Initially there was only going to be one showing of the last 2 episodes of Season 2 followed by a Q & A with Sidse, but demand was so great they had to put on 3 separate shows. I went along to the first, at 11am this morning when many people were watching Sidse reviewing the papers on Sky News.

I've never been in a cinema before when there's been applause at the end of a showing of what was effectively a tv repeat. I won't give you any spoilers, but the audience clearly felt the episodes were a fitting conclusion to series 2.

Sidse told the audience that she had been shocked by Borgen's international success and stunned that politicians (like Nicola Sturgeon) were mad keen on it.

She attributed its success to the fact that it was made by a publicly funded broadcaster, who had prioritised it, given it the best writers and directors. She said there was no product placement and no adverts in it - but we see Apple logos all the time.

She added that they'd been lucky with the timing of the show in Denmark. Politicians were reasonably well thought of and there was a strong female candidate for Prime Minister who eventually got the job.

Asked if she had learned anything about politics from her portrayal of Nyborg, she said that she had been surprised at how the media were such active players in the political system. She said that she was offended by talk of politics being a game and politicians being chess pieces when they were in fact human. She talked about how Borgen brought drama, the conflict of idealism and cynicism as well as psychology and emotions.

The third series of Borgen, she says, will be its last. It was originally planned as a two season story so the new series, yet to be shown here, is very different.

Sidse was amused when someone asked  if, to be likeable in a tv series, the politicians had to be from the liberal left, like Nyborg and Jed Bartlet before her. Apparently, before a word of Borgen had been written, the right wing were dissing the idea of the series,saying it would be full of "red bastards".

Oh, I should mention that, predictably, it took about 30 seconds for someone to ask her about Scottish independence - and she very diplomatically declined to give a view.

I'm all Borgened out now, having watched 5 episodes in the last 20 hours. That's not a bad condition to be in so don't consider that a complaint.