I decided it was time to start a new mini feature where I could quickly write down all the things I don't get round to writing proper blog posts about.

Where I've been: Nowhere very much, a change from most of the rest of March. A trip into Edinburgh for some Lib Demmery was just about it.

However, that is all about to change as we head to a spectacular '80s party at Anne and Stevie's tonight. Complete with Bob's new fog machine.....

Where I've almost been:

I might have gone to see Rory Bremner recording his new show in Edinburgh. My friend had a confirmation email, but we found out late on Thursday that that didn't necessarily mean we'd get tickets.

An increasingly depressing House of Lords debate on secret courts.

Very interesting documentary about Mary Magdalene, which has offended some for the few seconds in which Melvin Bragg discussed and drew no conclusions on whether Mary had had a sexual relationship with Jesus Christ. The only thing that offends me is the way in which Mary seems to have been stitched up by the patriarchy of her day and beyond. Anyway, it's well worth watching so catch it on the iPlayer if you can.

Masterchef: I have to try making Skordalia. Sounds delicious.

What I'm reading: Gone Girl, by Gillian Flynn. Not far in but enjoying the characterisation and style.

Highlight of the week:

Without doubt, the arrival of my gorgeous nephew, Baby Ethan. At a week old, he's discovered Cardigan Chic. 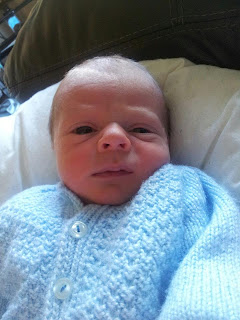 It's still another week until I get a cuddle with him - he'll be grown up by then! I can't wait.

The weather. Too darned cold, and I don't expect to have to drive through the snow to pick my daughter up for her Easter holidays.

George Carey: He has a very strange view of the word marginalised, I must say.  The Christian religion has special provision for schooling, reserved places in Parliament, and a highly privileged position in our culture. What is a shame is that he's been quite happy to marginalise women, LGBT people and anyone else who doesn't agree with his world view.

His comments on equal marriage are especially bizarre given that the Church of England has been given a specific exemption from the legislation. They are given more protection than they need. Why should they wish to stop other people from living their lives as they wish. Couples want to get married because they love each other, not to spite the Church.

North Dakota's new abortion law: the most restrictive of the 13 passed in the last three years by various US states.

Two weeks off with Bob and Anna. I think pandas and penguins might feature in the next week, as will the Science Festival in Edinburgh. And then we're off to the Black Isle.

And your wonderful Nephew Ru had his birthday...