Woolwich murder: there are some things we just don't need to know

The violent death of anyone is an enormous tragedy. Yesterday's horrible events in Woolwich were clearly motivated by prejudice and hate. Last October, Anna, Bob and I spent a very wet and cold Saturday evening at a hate crimes vigil where the names of people who had been killed in violent attacks simply because they were gay or disabled were read out. It was a very long list.

Just hearing their names was upsetting. Similarly, knowing that a young man going about his business had been killed in the most brutal manner imaginable makes you feel sickened and totally sympathetic towards the people who loved him.

In many of these cases, there was no blanket news coverage. Those murders went largely unreported. In yesterday's tragedy, we found out too many details, and even official spokespeople used highly unfortunate language. The media coverage was unfortunate to say the least and could have caused more damage.

I have to confess that Iain Dale's LBC radio show is a bit of a guilty pleasure for me. This story was unfolding during his drive time show. Although I didn't listen live, I read the blog post he wrote about it later. The post contains some interviews he conducted live on air with eye-witnesses who were understandably very distressed at what they had witnessed and who provided graphic detail of what they had seen. By the time I'd listened to the end of the first interview, I was retching, shaking and pretty upset. This was the account of the ending of a life, which his family might have been listening to. I am sure that he would have had at least one young relative who might have been listening to the radio in their bedroom after school. I just felt it was too much even for an adult to tolerate.

It just felt wrong that someone had had their life stolen in the most public and violent way possible for us all to be party to these awful details.

What was worse, though, was when news outlets started showing the message from the blood-soaked attacker. Why give this character the publicity he clearly sought?

Now, I know that the world of the 24/7 news cycle is competitive but does it always have to be a race to the bottom? Do people have to show something because everybody else has done so? Sometimes less is more. I was frantically looking for somewhere that wasn't playing that menacing message of hate. That's the station I would have chosen to listen to. I really didn't appreciate turning on the Today programme - I mean, the Today programme, the best news programme in all of British Medialand, for heavens sake, to hear that horrible man's voice.

I am not calling here for regulation, or banning, just for a bit of self discipline.

I also think people have to be very careful about the language they use, as Nick Robinson found out. He has had to apologise for using the phrase "of Muslim appearance" in a news bulletin yesterday. I can probably forgive him for having a brain fade moment because, as he explained in a blog today, it was used to him, by a "senior Whitehall source" who was in turn quoting the Police.


I was told by a senior Whitehall source that the incident was being treated as a suspected terrorist incident and being taken very seriously indeed. This information changed the news from a crime story to something of more significance. The police had, I was told, described the attackers as being "of Muslim appearance" and shouting "Allahu Akbar". On air I directly quoted a senior Whitehall source saying that the police had used that description.

We should maybe wonder how such a phrase got past  three intelligent, and probably privileged, people. Or maybe it was because of their privilege that they just didn't see its potential to cause offence. In any event, Robinson has had the decency to apologise for using it:


I'm sorry for using a phrase that, on reflection, was both liable to be misinterpreted and to cause offence. Many Muslims were quick to condemn the attack and to distance themselves and their religion from the brutal savagery seen on the streets of Woolwich.

@frasernelson Thank you for sharing link. Seems we Muslims accused of colluding, unless we keep condemning these atrocities. @owenjones84
— Baroness Hussein-Ece (@meralhece) May 22, 2013


Nobody goes to David Cameron to ask him to condemn on behalf of all men every horrific example of sexual violence. Nobody expected all Christians to condemn Christian Anders Breivik, the killer of so many young people at Uttoya. The minute any Muslim does something wrong, somehow it's supposed to reflect on all of them, and, even worse, be part of organised terrorism? There's a huge inconsistency there. As liberals, surely we are not going to stand for that. Willie Rennie made the point at First Minister's Questions at Holyrood today that this attack was every bit as painful to the Muslim community as it is to everyone else.

As Meral said on the World at One today, we all share the horror of this attack and we all need to stand together and work together to eliminate such brutality and hatred.

The coverage we've had, from media and social media, has not helped. It's whipped up unnecessary fear - and when fear turns to hatred, things get ugly. We need to respond to this with calmness, solidarity and wisdom.

And I leave you with one very clever way of illustrating everything I've just written: 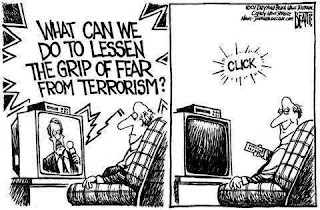