The three dimensions to Alistair Carmichael's speech: a positive vision of the UK, incoherent nationalist ideas and future powers

This article first appeared on Liberal Democrat Voice
Alistair Carmichael's keynote speech and subsequent question and answer session in Stirling today touched three different dimensions of the constitutional debate, the last of which should cheer any Liberal Democrat heart. Up until now, roughly, the nationalist campaign has been all about painting a pretty picture of how all our problems would disappear if we controlled our own destiny, and in dismissing all searching for detail and questioning as scaremongering. The pro UK campaign has been about robust analysis of the SNP positions, but it hasn't even made my heart sing and I'm voting for them. It's been all head and fact and evidence based and worthy,  but it's not appealed to the emotions.  The parts of Carmichael's speech trailed overnight heavily emphasised what Scotland gains as being part of the UK, though. Were we about to see a change of emphasis?

The positive vision for the UK

It's not just about money, said Alistair. It's about what the 4 nations of the UK have built together. He said Scotland gets more out than it puts in which will no doubt have the nationalists in a tailspin of indignation - but the same is the case for all the countries which make up the UK, greater than the sum of their parts.

One of things of which I am most proud in the UK is that we’re able to absorb, to protect and to cherish differences: differences of culture, religion, accent, origin and much, much more.
But let no-one underestimate what we share together and how that helps us succeed together.
Of course, our commitment to the UK family is not just about the facts and figures.
It’s also about the values and ambitions we share.
The hands that built the United Kingdom have created things of enormous value.
They strike a chord of pride within us and remind us all of what we can achieve together.

There was a long section about what we have achieved by working together, building institutions like the NHS.

And when the UK Parliament established the NHS, it did so to fight those evils within the entirety of our borders.
We faced the same problems, we felt the same outrage and we together we found the same solution.
Today, people across the UK family take enormous pride in a National Health Service, providing comprehensive health services, free at the point of use for all UK citizens wherever they fall ill within our United Kingdom.

The BBC was similarly praised, as were our UK sporting stars, cheered on by everyone across the UK in 2012.
Why, he asked, would you want to break this up when we have all this plus economic stability, more secure pensions, cheaper mortgages, a single labour market and huge international influence.

The incoherent nationalist idea of independence

In contrast to all this, independence, he argued, would be a massive risk, especially as the nationalist view wasn't either clear or actually deliverable. They were making promises that they were in no position to know they could keep. He looked back to 2007, when he said an independent Scotland would be the low tax, prosperous Celtic tiger. By 2011, the vision was for a Scandinavian social democracy with the White Paper a fudge between the two.
But here was the problem:

Even in the best of times, no-one can have a low-tax economy paying for Scandinavian levels of social provision.
If they could, Scandinavia – and others – would have done it.
To say that they will do so with the backdrop of an ageing population and reduced oil and gas revenues, only adds insult to injury.

He called on the nationalists to produce a full, true and costed vision of what independence would mean so that people would know what they were being asked to vote for. 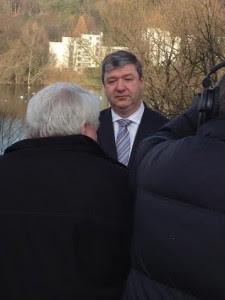 "I am a Liberal Democrat and a Federalist"

The F word, federalist. He said it. He volunteered it. And not only that, but you should have seen the way his eyes lit up when he did. This is ground where he is very comfortable and he needs to take the chance to talk about the plans set out by the Campbell Commission. In response to a question, he said he supported home rule for all nations and regions of the UK if they wanted it.
He talked about how the Liberal Democrats had led the way in making the case for more powers. He particularly said that he wanted the debate to be as much about raising money as spending it.
As a fellow Liberal Democrat and federalist, I am delighted to see these ideas unashamedly in the mix again. I am, however, perplexed by those who say that they are federalists but would vote for independence if they didn't see a prospect of achieving federalism. How does that work? Independence is very, very different and much more risky.
One particular questioner took issue with his votes on the Bedroom Tax and against an investigation of food banks. This is a common tactic of the nationalist campaign, and, in fact, I saw the questioner afterwards but with her Yes Scotland badge on. Alistair handled it well, saying that the best way to alleviate child poverty was to get parents into work like the Coalition has been doing. He also said that the foodbanks vote was not about just foodbanks. There was stuff in there, like the unworkable energy price freeze that he didn't believe in and couldn't support.
This speech needed to show a bit of heart and soul to balance the worthiness and evidence base of the very academic Scotland Analysis series of papers. Alistair did that very well. The slight issue is that the Treasury's announcement about debt kind of brought technical stuff back into play on the same day and I suspect that the positive stuff might get lost in the main coverage. Teh soundbites we'll see are going to be more on the variant of "If the first act of an independent Scotland is to default on its debts, who is going to want to lend it money?" rather than the "Look at the lovely stuff the UK has made." variety.
The speech in full is available here on my own blog. It's worth a read to get the full picture.
Posted by Unknown at 9:00 am