To me it's unbelievable that as one of the most affluent countries in the world, we can't provide a roof over everybody's head. It's bad enough that people sleep rough at any time, but in the depths of Winter, and this hellish Winter at that, the fact that people are sleeping outdoors in Princes Street Gardens is something we should be deeply ashamed of.

I'm very grateful to Wendy Fraser (aka PJ) for taking the time to write down this moving account of her time volunteering for Crisis in London these past two Christmases. 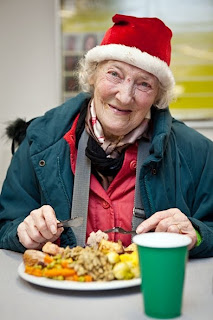 I read with interest, and despair, the report by BBC Scotland on Friday entitled ‘Homeless urged not to sleep rough’ Although the article highlighted the plight of a homeless woman in Edinburgh, it barely scratched the frozen surface of a national issue that gets neither the media attention nor the financial investment needed to improve the harrowing existence of the residents of our streets, doorways and parks. Was I the only one who felt that this portrayed the homeless as ‘choosing’ to sleep on freezing streets when a bed was available if they would only ask? Let alone the underlying tone of the article that the council were providing adequate facilities.

Crisis is a national charity that supports the homeless and for the past two years I have had the privilege of volunteering with them during their Christmas campaigns in London. Over the past 39 years Crisis have opened up shelters across London during the Christmas week to give thousands of homeless people a safe place to sleep, hot food and access to medical care. Whilst what they do is a logistical triumph and a truly invaluable service, it simply isn’t nearly enough to support these people back into society. It’s honestly quite a grounding experience to be involved in something like Crisis; you can’t avoid the destitution of some of these people nor the hopelessness of their situations. Neither can you avoid the desperation of the support workers who are continually battling against cuts in their budgets and facilities being closed despite the numbers of users increasing at an alarming rate.

One of the first centres I worked in two years ago had a high proportion of Polish and Eastern European ‘guests’ who had come to London to work on the building of Terminal 5 and found themselves jobless and homeless, and on the whole unable to communicate in English, after the work was completed. This Christmas it was estimated that 60% of the guests were Polish and Eastern European (I’m deliberately distinguishing between the two after a rather comical geography lesson from a Polish man who drew me a map of Europe and insisted that Poland was central Europe and everywhere else lay north, south, east or west of Poland). That percentage is expected to continue to rise.

This year I was struck by how many of the guests had just been released from prison, all of them with nowhere to go other than the streets. I spoke to one lady who was 74 and coughed, spluttered and wheezed the whole time I chatted with her. She had TB (the non-infectious variant she assured me!) and carried a chart with her with photographs of the pills she had to take and the order in which she had to take them, she couldn’t read. Her one wish was to get back into prison because at least there she had a bed and food, but not safety - she cackled and coughed simultaneously at that point.

The youngest person I came across in the shelters was an 18 year old boy, the oldest was in his 80s but he couldn’t remember exactly how old he was. Poverty and homelessness can quite literally happen to anybody. A few strokes of bad luck and any one of us could share the plight of those struggling to exist on the streets. Yes, many of them are alcoholics and drug addicts, prostitution and crime are the norm not the exception. But every person I spoke to wanted a different life, a way to escape the downward spiral of homelessness. For some of them the only escape they could envisage was to end their lives.

I listened to their stories, held their hands and gave them hugs when they cried. It wasn’t enough. I felt useless and inadequate when faced by their desperation. I can only hope to change a tiny little bit of their lives very briefly. When I choose who to vote for in the General Election (and I haven’t yet), I will be looking to see which party truly cares enough about our homeless to make a lasting difference. Less talk about the rich and more action for the poor!
Posted by Unknown at 9:00 am

Well done,a very accurate musing
i was a guest at one the shelters
shame not open all round,cause some the hostels in london are the pits! thats some of use stay on the streets, at least you can stay away from the bullys...staff and residents
regards sally