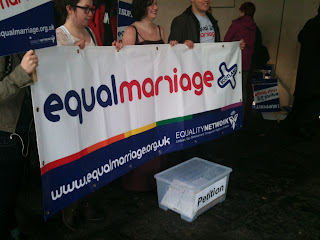 Getting my daughter out of bed in the morning in the school holidays is not easy. Actually, it's not that easy in term time either, now I come to mention it. She's a night owl and she would happily sleep the morning away, emerging around lunch time in a reasonable humour. Yesterday, though, she was up and ready to go out at 10:30 because, in her own words "I get up when it's important".

So, what does a 13 year old consider important? Supporting equal marriage, that's what. Yesterday, the efforts of the brilliant Equal Marriage campaign culminated in a religious blessing for Glasgow couple Jaye and Ruth Richards-Hill outside the Scottish Parliament at Holyrood. Guests included random people like us, MSPs, two sisters from the Order of Perpetual Indulgence and a whole stack of journalists and photographers, around 150 people in all. The atmosphere was sunny, even if the weather wasn't - although the part where we were all out in the open air was one of the few moments it wasn't pouring with rain.


The Catholic Church in Scotland, led by Cardinal O'Brien, has declared war on equal marriage, threatening its supporters with an unprecedented backlash if the Government decides to legislate, aiming to build a £100,000 war chest to "support marriage". They plan to have a special collection on 26th August to do this.This is my wedding anniversary. I'm a huge fan of marriage and am happy to support it - for all. Bob and I will be celebrating 24 years of marriage and we're keen to combat the disappointing message of intolerance coming from the church by promoting equal marriage in a positive and inspiring way. Any ideas?


I just hope that the SNP Government doesn't give in to this bullying and intimidating approach from the Church leaders. Polls suggest that almost 2/3 of Scots support equal marriage and that includes ordinary members of churches, including the Catholic Church. While the Government is expected to give civil marriages the go ahead, there is speculation that they will not allow religious bodies to conduct same sex ceremonies, which just entrenches the discrimination against LGBT people.


So we arrived outside the Parliament at just before 11:30 yesterday. The Church may be talking war, but there were no weapons or fighting talk here, only 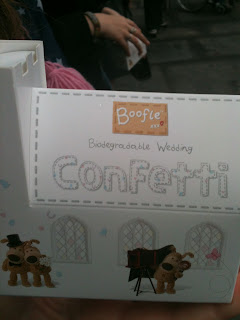 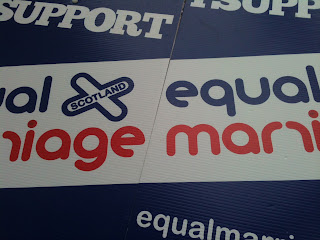 It was lovely to meet Jaye and Ruth and share in the event with them. The BBC called it a mock wedding - but it was more of a brief religious blessing of their marriage which took place in South Africa. Being a soft and soppy creature, I did fill up a bit when it was taking place. How can so much energy be put into opposing something that's all about love and commitment? You'd think doing something about poverty or actual war would be a bit more important. Live and let live and all that.


I managed to catch up with Ruth for a quick chat about why it was so important to her to have a religious ceremony and why she and Jaye had to go to the other side of the world to get it. This is what she had to say.


listen to ‘Interview with Ruth Richards-Hill, one of the stars of today's Equal Marriage event at Holyrood.’ on Audioboo


I was particularly struck by what she said about South Africa's history and how it's now become a beacon of equality.

You can hear a longer interview with Ruth and Jaye on BBC Good Morning Scotland here at around 2:31 minutes in.

The politicians were also given their chance to speak with the crowd doing a bit of playful match making when both Patrick Harvie and Jim Eadie both said they needed to find a husband. Where they all agreed was on congratulating Tim Hopkins and the rest of the Equality Network for running such an energetic, high profile campaign. They've presented a strong case, always been positive and have been everywhere. The fact that over 20,000 responses to the Scottish Government's consultation through their website was fantastic.

It was a super event to be a part of. I hope that it's given the message that nobody need feel threatened by equal marriage for all in religious settings as well as civil. It's the solution that suits most people. While it's right that no organisation should be compelled to take part in religious marriage, similarly, they should not have the power of veto over others' lives.

And just a quick insight into how these occasions with loads of photographers work. I have about 4 different versions of the tossing of the bouquet at various angles as the photographers kept asking them to repeat it. 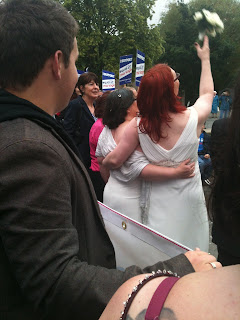