Our first ever Pride

It seems ridiculous, given that I've been campaigning for LGBT equality for most of my adult life, but I hadn't been to a Pride event before. I'd seen one in all its awesomeness, in London in 1992 as I was heading to a Women Liberal Democrats meeting but I'd never managed to get there.

I'd been disappointed to miss Pride Scotia on 30th June as we were away on holiday so when I realised I was able to get to Pride Glasgow on Saturday, I jumped at the chance - and was really pleased that both Bob and Anna wanted to come too. I fully expected Bob to jump ship at Queen Street and head off to the record shop, Rubadub, but, no, he came with us and walked all the way from Kelvingrove Park to George Square.

First of all, I have to say that Kelvingrove Park is absolutely gorgeous. Why has it taken me this long to discover it? We loved the walk up from Kelvinbridge subway station. Anna pronounced that she thought Glasgow was cooler than Edinburgh. It just seems to be a place I can imagine lying in the sunshine next to the river reading a pile of books. The university buildings around provide some fascinating architecture and it was a lovely respite from the bustle of life in the city.

To back track a bit, before I even left the house, Kelvin Holdsworth, Provost of St Mary's Cathedral in Glasgow, a church so inclusive it's even prepared to welcome heathens like us, had me in tears with this moving blog post On being Proud.

I’m particularly proud of my sisters in the clergy who, by and large, have found it easier to walk beside me in these struggles than most of my straight male friends. The goodness of my sisters reminds me that their own struggle is not over; that justice is indivisible. Reminds me of the common goal, that one day, we will walk in a world free from discrimination and prejudice of any kind.

I’m proud of my gay brothers and sisters in other denominations – from the highest of the high to the wee-est of the Frees. I’m proud of Scott Rennie and of Affirmation Scotland who have supported him and so many others in the Church of Scotland. I’m proud of my gay brothers in the Roman Catholic clergy, some of whom I was with recently. We met in secret for fear of the Church. We prayed for a time when all closet doors would be smashed to pieces, starting with those in the Vatican and we prayed for all those who sit in discomfort on ecclesiastical  thrones throughout the world. For those whose struggle is secret – know that it is valuable, and true and holy and that I am proud of you.

One of the first people we saw at the gathering point was Sophie Bridger, former President of Liberal Youth Scotland and we were really chuffed to be invited to walk with her and the rest of the young folk. Anna was particularly thrilled to find two fellow Sherlock fans to geek out with and she quickly ditched us to spend time with them. Kelvin was there with a contingent from the Cathedral too, including Jaye and Ruth Richards-Hill from last week's equal marriage event at Holyrood and their delightful dalmatian, Ginny, who was very comfortable with all the attention she was receiving.

I have to say I felt distinctly under-dressed. Nothing some glitterly pom poms and sparkly devil horns wouldn't have sorted out, but, really, I need to do better for next year. There were all manner of bright outfits, people with rainbow socks, and the Sisters from the Order of Perpetual Indulgence were truly spectacular. At this point you might want to read Kelvin's tale of his encounter with a young Australian. 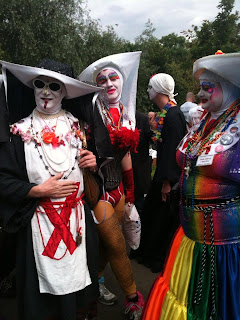 We set off towards town behind the Carriage of Awesome: 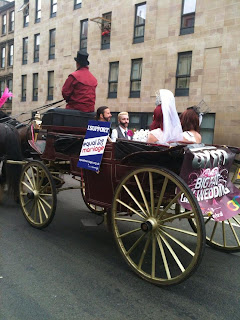 I mean, horses with pink feathers. What more could you want? 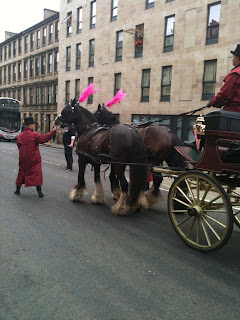 We made our way to George Square in probably more organised fashion than I'd seen on a march before where there were loads of stalls. The independence referendum was not allowed to be ignored as both Yes Scotland and Better Together put aside their differences for a few hours and had lovely rainbow banners on display. Better Together has come up with a good range of campaign tat. I have seen mobile phones smaller than their badges, but we proudly wore ours. The Scottish Transgender Alliance, Equality Network, LGBT Youth, Anmesty were all represented there.

There was a rally at which Patrick Harvie, James Dornan, Drew Smith and Tim Hopkins spoke. Just as I do when the BBC does it, I had a bit of a tantrum over the lack of gender balance in the speakers. At such an event, particularly, I would have thought that a bit more thought could have gone into the line up. It was the only facepalm moment of the day. Why could they not have asked Sophie Bridger to speak? Her leadership of LYS's Separate isn't Equal campaign was inspirational.

After the speeches and a bit of chatting, we went off for a bit, Bob to buy records and Anna and I to Forbidden Planet where she acquired two more Doctor Who t-shirts. They're expensive but good quality. Her 10th Doctor one has been worn and washed so many times since she got it at the Doctor Who convention in Cardiff in March and still looks like new that I was quite happy to provide her with some more.  This time it was 7th and 9th Doctors. She's inherited Bob's fascination with t-shirts. He was wearing bright red braces with a bright green Weird Fish 100 litres t-shirt that day. He came back with a stash of records I'd never heard off but seemed delighted with them.

A very tired Anna and I returned to George Square and sat and relaxed for a while, listening to Joe McElderry (X Factor winner from a couple of years ago) perform. He was actually very good. I never really thought it was a god idea to have that horrible Rage Against the Machine song for Christmas number 1 that year. 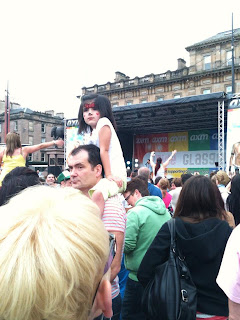 We didn't get the best view, but if you look hard enough, you can just about see him on the stage.

Anna was happy with her haul of badges I hadn't thought of it this way before, but when I saw  the Never kissed a Tory sticker on my teenage child, I thought it read far too much like an invitation..... 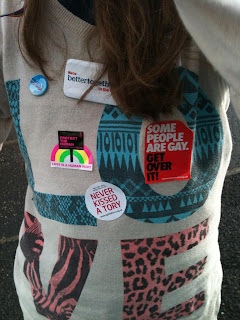 We returned home absolutely shattered but determined that this will not be our last Pride. We had a brilliant day.
Posted by Unknown at 12:55 pm

Your daughter prefers Glasgow? She is definitely a good egg