Vince on leadership speculation, principles, Osborne, independence and much more

Edinburgh has been very well indulged this weekend. Madonna played Murrayfield, the Hitchhiker's Guide to the Galaxy people were in town and last night, Business Secretary Vince Cable answered questions from Scottish Liberal Democrat members. This was quite hastily arranged at the end of last week, but the room was packed. This was not bad for a day when there was so much sport on tv. 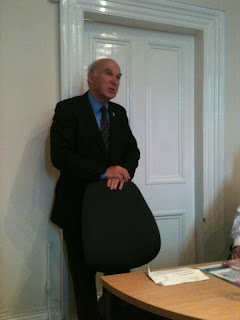 We wanted to include as many people as possible so we took questions via email and Twitter. Vince covered a huge range of topics and stayed considerably longer than planned. He also didn't keep his audience waiting for four hours before even getting on stage unlike certain international music icons. Subjects
included tax, immigration, banks, honesty in public and corporate life, the coalition, the Chancellor, the arms trade, the independence referendum, renewable energy, equal pay, that interview in the Financial Times, executive pay, getting more women on boards, whether London should still be a global financial centre and the Green Investment Bank. He did what I feel our ministers don't do enough of - take responsibility and credit for what they personally have done. He said that he and Mike Moore had insisted on the new Green Investment Bank being in Edinburgh and that he had insisted against the wishes of others that the Minimum Wage should be increased this year. What was interesting was what wasn't asked - there was nothing about Lords reform, indicating, maybe, that north of the border our members aren't that fussed about it?

We didn't spare him either. One of the questions which came in over Twitter was "when did you decide to stop being principled and become morally bankrupt for the sake of a sniff of power?" His response was that it would have been unprincipled to sit on sidelines when the country needed a stable Government to deal with the economic crisis.

Everyone will be delighted to see former Edinburgh West MP John Barrett back in action after a period of illness. He chaired last night's session in his usual relaxed and good humoured style. 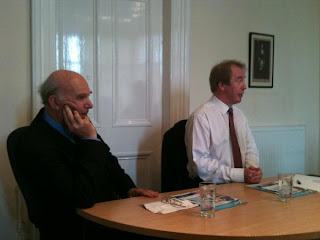 Vince was in great form. He spoke to us like we were grown ups and showed quite a lot of empathy and understanding with our position as members and activists. I asked about how we get people back who've voted for the party for decades, or who've stopped being members over the coalition. He offered encouragement, remembering how he'd stood for the party when we were an asterisk in the opinion polls and then being elected to Parliament less than a decade later. He understood how the presence of the nationalists makes the playing field different up here - as you'd expect from a former Glasgow Councillor. He's keeping a close eye on Salmond, whom he likes personally, but suspects that the shine will come off the SNP as they continue not delivering on things in Government and in the wake of the referendum on independence. I feel happy that he's on the Cabinet Committee which is discussing Scotland and the referendum. He and Mike Moore are an effective team. Mike will do reason, Vince will do robust realpolitik. We need both. Everyone agreed with him that Scottish leader Willie Rennie is an "inspirational character."

I collected together tweets from the event which cover most of the questions and put them in a storify thingy which is below for your enjoyment. There are more photos and even a bit of mischief. Find out exactly what Vince said about the cult of youth...