I am severely unimpressed with Murdo Fraser, Conservative MSP for Mid Scotland and Fife. He's been pretty robust with someone who criticised him on Twitter today, saying:


What mindless pathetic individuals you are. Begone trolls.

Now, I know that politicians take some pretty heavy duty abuse online. I've had my fair share of it myself and I'm only a mere foot soldier. I've been called all sorts of names. The only time it upsets me is if it comes from somebody I have had some interaction with or have some respect for. Most of the time I completely ignore it. I take the view that my life is too short to waste on such people.

There are some occasions when I'll draw attention to some abuse I receive, or something that's been really horrendous about someone else. I did when I was called an f***ing disgusting racist nazi w***e by someone who didn't even try to hide their identity.

I try not to descend to the level of these people, though.

Now, I could forgive Murdo being a little grumpy with the people who had tweeted him. One of those accounts doesn't exist and the other is protected so I can't tell you what sparked it off.

However, I had been annoyed earlier in the day when Murdo had retweeted someone who had said something really insulting about Willie Rennie: 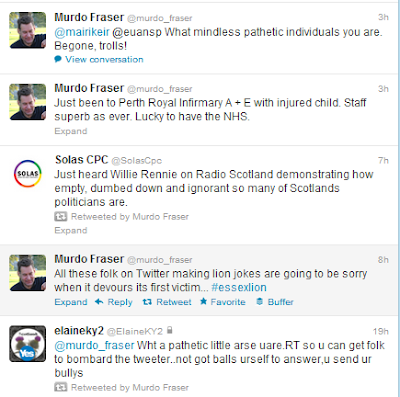 I'm well aware that retweeting a comment doesn't necessarily mean that you agree with it. Sometimes it does, though. I'd hope that people know me well enough to understand what I'd agree with and what not, but I can't be sure.

On this occasion, I think it would have been sensible for Murdo, if he really couldn't stop himself from retweeting,  to have added some caveat to it. He could have said something like "trolls are after everyone today", just putting a bit of distance between himself and the sentiments expressed.

Anyyone looking, like I did, could interpret it as agreement. It looked like he was endorsing an insulting comment about a fellow MSP, someone who represents the same region. I'd say that was a pretty poor show.

To be fair, I did take it up with him and he replied that:

"RTs not endorsements, Caron. If you follow me you'll know I'm forever retweeting abuse I receive."

I don't think it's right, though. It could easily be implied that he was having a personal pop at another MSP. If he'd said anything like that in the Holyrood Chamber, he'd have been pulled up for it.

I think that Murdo should apologise to Willie for retweeting a deeply insulting comment about him and think twice before doing so without caveat in the future. When an item like that appears on your Twitter feed, you really can't guess the motive. Like the look on the lady's face in the iconic painting, it literally could mean anything.

If Murdo takes exception, like anyone would, to being attacked by other people, then he should be careful not to give the appearance of doing it to others. I've asked him to state that he doesn't mean it because his first reply doesn't actually say that. He hasn't replied yet, but I'll keep you posted.

I dunno Caron, it's no' that offensive and methinks thou's got a dose of the too-much-protest - did ye hear the programme? WR was very weak again, and as a guid judge o' mediamonkeys, I've got to say WR is mid-table Scottish Div. 3 and no amount of Murdo-bashing is going to raise him into the play-off places. He's going to have to grind oot a muckle performance or twae all by himsel'.