That first day of normality after holidays is always awful. Last night when I set the weekday alarm on my phone for 6:25 am, my heart sank.

This Summer has been, despite the weather, one of the best ever. We've done loads. First of all we had the first week of July up on the Black Isle, which surely has to be one of the most gorgeous places on earth. I mean, look at this: 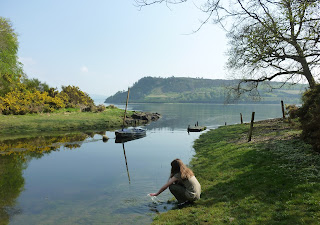 Bob also had the last two weeks of the holidays off work. While we didn't go away, we had some great fun at the Festival, seeing Alan Davies, Sandi Toksvig, Toby Hadoke, the Comedy Club for Kids, a very amusing debut show by comedian Hayden Cohen called Age of the Geek and a fabulous production of A Midsummer Night's Dream at the Botanics. The three links are to reviews I've written for Festival Journal and to the booking page for the Geek show. I will review the others when I get round to it.

We also had days out at Dare Protoplay in Dundee. Again Anna was a junior judge in the video games competition and again the gender balance of the teams was a cause for concern. There were only two women out of fifteen members of the winning teams. This s a problem because you then get the industry developing games that girls aren't interested in, or which show rape as a way of building character, or other violence against women. I wrote last year about the need to address this.

We had our night away in Bearsden where Anna took over my Twitter account and we went to Jupiter Artland in West Lothian and the Scottish Deer Centre in Fife.

It was all pretty blissful, really. I even managed to read a few books - the Hunger Games Trilogy and Stieg Larsson's Millennium Trilogy are both brilliant - and, of course, there was the small matter of Olympics addiction. London put on a spectacular show and gave a good account of the UK as a fabulous place to visit. And Team GB showed us the benefits of the UK working together to produce excellence and support our sportspeople properly.

One thing about not going away, though - people tend to think that they can still expect you to do stuff which means that you don't really get to properly switch off. And sometimes you end up doing it because it's quick and you might as well.

Today came as a huge shock. That 6:25 alarm was most unwelcome, especially when it was accompanied by torrential rain. Mind you, it's really irritating going back to school in bright sunshine, so I guess we can't really complain about that.

To add insult to injury, the first thing I saw in my inbox was an email from Amazon emblazoned with the words END OF SUMMER SALE. Just rub it in, why don't you? I know it was for a sale, but I don't really need any more encouragement to buy any more from them.

I really missed Bob and Anna when they went out this morning.

Now I have an eye-watering To Do list to get through and I don't think we'll stop again until Christmas. At least I'm sufficiently recharged to tackle it.