What a difference 20 years makes, Laura

Almost exactly at this moment 20 years ago, Bob and I were at Liberal Democrat conference in Harrogate. I just happened to casually glance up at a screen and see my name there - with an instruction to go to the front desk. It had been there since the day before.

I assumed, as you do when you're at Conference because, clearly, the rest of the world ceases to exist outside that whirlwind of debates and fringes, that it was something Conference related. The instruction, to phone my parents, scared me witless. There had been no reason to assume imminent danger. My dad had had recent surgery, but was fine. My sister was pregnant, but the baby wasn't due until Hallowe'en. My biggest fear was for my 90 year old Granny.

This was, of course, in the days before mobile phones. It seems strange to remember that such times existed. I had to get out of the Conference Centre and cross the road to an old fashioned phone box where I spent the next half hour.

Granny was fine, and so was Dad. And so was my sister, and my new baby niece who'd put in an early appearance and was in the Special Care Baby Unit in Perth. All I knew was that she was called Laura and weighed 4lb 6.5 oz. I didn't even have a photo as you just couldn't do that in these olden days.

We decided that as soon as Conference was over, we'd head straight up to see her and spend the weekend with the family. Here she is encased in bubble wrap. 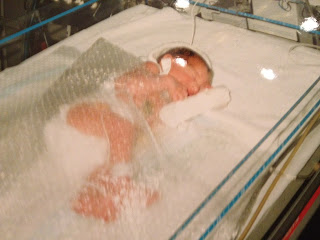 Just a few weeks later, we were back up north and Laura was home. I remember sitting up late with her snuggled up on my shoulder watching Bill Clinton win the US Election. Here she is in her pram. 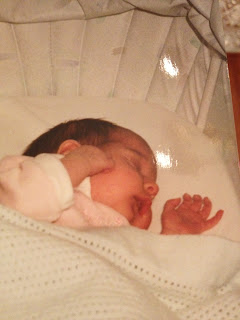 We were looking through all the photos last night at my parents' house where we were gathered to celebrate her 20th birthday. This one was taken on her first meeting with her Great Granny Annie. 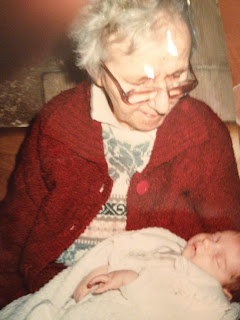 It kind of mirrors an earlier photo taken 25 years earlier with me. 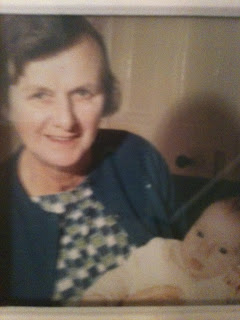 Twenty years on, the sweet and snuggly baby Laura is about to start university. I'm not going to put up a photo of how she is today - at least not without her permission because she deserves her privacy. Today, she's a feisty, brave, loyal, kind, generous (she gave me Chicken Pox once), fearsomely intelligent young woman and I love her to bits. Despite what she did to me yesterday, the mischievous little minx.

It's basic security practice that you don't go anywhere near my family without putting a security code on your phone. They simply can't be trusted. I must be getting better at it because it only took my daughter 4 attempts to guess it before handing it to her Uncle Jamie so he could put up a Facebook status about how I loved Android phones. I'm so glad people know me well enough to realise it was clearly a joke.

Before that, though, I had started to receive a stream of texts giving me facts about cats with instructions on how to subscribe. It was fine until they said they were costing me 25p per hourly text and gave me a way of unsubscribing. I sent the code, only to be told it hadn't worked and I was now subscribed for a year. I didn't take it that seriously, and Anna said she's heard something about such a prank over the internet and told me how to make it stop. A quick Google search verified that. I may have had confirmation that it was a prank, but I still didn't know who was responsible. There are four potential suspects with equal amounts of motive and opportunity. And Laura, with her boyfriend John, is top of the list.

She did try to kid me on that she hadn't see the actual texts and I, after the strongest gin I have ever had in my life (I think my Dad forgot to add the tonic), blithely and naively handed her my phone. What appeared next, was a Facebook status intimating that I'd joined the Scottish Tories, loved Maggie Thatcher and included the words "Fook Nick Clegg." It was such an obvious prank that I'd have left it up had she not actually tagged Nick Clegg in it so it would appear on his wall. I'm sure it would go unnoticed, but it's not the sort of thing that I could allow, in all conscience, to be there.

They say laughter is the best medicine - and there was plenty of that last night, along with my Mum's delicious Lasagne, birthday cake and very cute puppy dogs. What more could you want?

And, lovely Laura, revenge is a dish best served cold. I'll get you back. Someday.
Posted by Unknown at 10:51 am