Over the last few days, Anna's made it clear to me that she really doesn't want to bother with Mother's Day this year. She said she just basically thought it was a waste of time. She said that it wasn't fair that there was no Daughter's Day and my protestations that there were 365 of them a year fell on deaf ears. She said it with such a straight face, backed up by her father, that she pretty much had me convinced.

So, fast forward to this morning, and she's up at 7:30, champing at the bit to get downstairs. I'd been out late at the Alliance Reunion dinner in Glasgow, so did not take very kindly to this. It's not as though she was wanting to go downstairs on her own. I had to go too.

I managed to hold her off for an hour. To my great surprise, the scene was set with half a dozen pink parcels and a vase full of lilies.

Most of the parcels contained chocolate of some sort - certainly more than someone of my size should contemplate eating, but, hey. I particularly liked the pack of miniature bars of Green and Black's.

There was also a fix of Professor Brian Cox - his new Wonders of the Universe book, and the new REM CD.

After I'd opened that lot, there was an urgent whispered conversation between Bob and Anna. The only bit I could make out was "is it switched on?"

I didn't have long to find out what this was all about as I was led to the kitchen and told to sit at the laptop. Then Anna fired something up.

I couldn't believe what I was seeing. Even now, I'm still taking in all the various aspects of it. I could see it was an animation, which is a major interest of hers. Then I recognised the intro to my favourite song, Defying Gravity from the musical Wicked. Those of you who know me well will not be at all surprised at my love of a song which depicts the moment when the Wicked Witch of the West makes her break from the establishment.

It took my ears a few seconds to compute that the backing vocals to this animation were being sung by Anna herself. Defying Gravity is an incredibly difficult song to sing, and it's not really made for 11 year old voices, but she did a fabulous job. The characters in her animation were cats, not witches and I was amazed that they moved in time to the song. One particularly stunning bit was when the Elphaba cat, at the point in the song where it says "I'm gonna close my eyes and leap" closed her eyes in perfect timing.

This animation was 419 frames long and she'd put such a lot of time and effort into it. I wish I could post it here, but I reckon Stephen Schwartz, who wrote the song, might have something to say about that, and I can't afford the royalties. I am so touched at such a lovely, personal, special gift which showed how much she'd thought about it.

I have some pictures, though, one of Elphaba cat and the other of the credits, done in Anna's inimitable style. 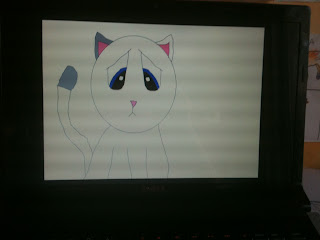 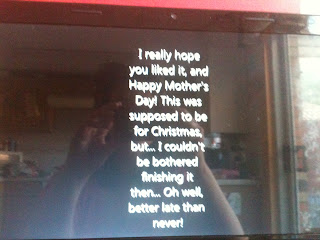 I am so delighted with this, even more delighted than I am with her great enthusiasm to spend the rest of the day stuffing envelopes for Alex Cole-Hamilton in Edinburgh Central. There may well be some financial reward for her in that one, though.
Posted by Unknown at 10:42 am

What a lovely gift. Your daughter has a wonderful imagination- i'm sure she'll be a success at whatever she puts her mind to.