Can Cameron and Osborne please just shut up about Scotland?

I have a job for Olly Grender and Christine Jardine, two of the Lib Dem media people in Downing Street. They need to head for Ikea, buy a large cupboard and lock David Cameron or George Osborne in it every time they feel the need to talk about Scotland, the SNP, or the independence referendum. They could even line it in tartan if they like, as long as they keep them out of sight until the urge passes.

You see, it really doesn't help. There are issues to do with the referendum, as Willie Rennie pointed out the other week,  but they are better dealt with in Scotland, by the Scottish parliament. Even if it were obvious that Salmond was trying to rig the referendum, then the Scottish Parliament and, more importantly, the Electoral Commission up here can deal with that.

George Osborne has been talking about how the independence referendum is damaging business confidence. There may be some truth in that, but, frankly, I suspect business is generally just putting so much energy into keeping going during this economic turmoil that the independence referendum is not in the forefront of many people's minds. Getting their banks to lend more and people to buy their products might be more pressing concerns.

Even if there was evidence to back up what Osborne was saying, I still think he should stay out of it. A Tory telling Scotland what to do is never going to be well received. The Scottish Tories have been asking their definitely not boss Dave to hold the referendum from Westminster. Are they daft, or something? Have they been infiltrated by the SNP? The only people who would win from such a move would be those who want to separate us from the UK.

Just look at what SNP activist Grahame Case had to say on Twitter yesterday about Osborne's comments: 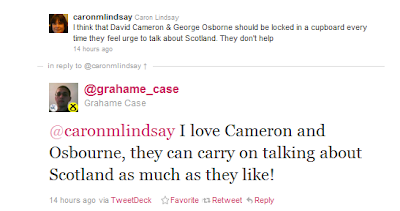 You have to wonder if Alex Salmond loves them as well, given that they push a few more people in his direction every time they open their mouths.

Scotland's future must be decided by Scotland's people - and if that's to go for independence, then I might not like it, but I'm not leaving the place that I love, so I'll have to live with it. We're a long way from that, though. Those who don't want to see the UK broken up have to be a lot wiser about how they push for their cause. Their arguments need to be full of passion and emotion as well as challenging the nitty gritty of the SNP's drive for separatism. Above all, we need not to play into the SNP's hands. Willie Rennie won one over on them the other week when they admitted that independence would win even if more people backed Devo Max, and Mike Moore has asked some reasonable questions of them. However, Labour and the Tories' continued obsession with this issue and this issue alone is not helping. They need to back off for a bit too. When the referendum legislation is presented, it should be scrutinised within an inch of its life by Holyrood in a businesslike, respectful and professional manner.

In the meantime, George and Dave, please just say nothing. You really aren't helping those of us who want Scotland to continue as part of the UK. Seriously, every time you open your mouths on the subject, I cringe and the SNP dance for joy.
Posted by Unknown at 1:23 pm

You won't be surprised Caron, that I don't agree with you, but I can certainly see where, as a unionist, you are coming from.

The secretary of state said that he would engage the whole cabinet in the fight against "separation"...and we raised a cheer.

The thought of a pile of posh Tories coming up here and telling us we are too stupid, too wee and too poor to manage without the benign help of the old Etonians and Bullingdon boys, is music to our ears.

However, leaving it to the likes of Iain Gray, with his ill informed nonsense about Scotland being forced to join the Euro, which anyone with a grain of sense knows is absolute rubbish, is not going to change the mind of the thinking population.

What unionists need to do is come up with good reasons to stay, rather than bad reasons for going. They need to paint a realistic picture of a future life, say like people enjoy in Norway. Good roads, excellent health service, high speed internet, good welfare, efficient policing, first rate education, good care of the elderly. An efficient, well run country. Let's see if anyone will believe that.

Telling people how stupid, poor and small they are, doesn't work, especially if the teller has had every advantage in life and has had no connection with ordinary people in England, never mind Scotland.

Dear dear since your bestest buddies are the Tories and Michael Moore spends every waking minute undermining the Scottish Nation let alone insulting us.