Willie Rennie, his house and the Olympic rings

Willie Rennie has been talking to STV about his enthusiasm for the forthcoming in London next year. You do get the air of excited child in a sweetie shop from him - and for somebody who loves sport as much as Willie does, lots of them being played at the highest level on the same island must feel like all his Christmases have come at once. I'm not sure I quite buy the idea that he'll actually be watching all of it. I can't imagine him sitting still for long enough to do that. He tends to do rather than spectate.  Mind you, word reaches my ears that he used to watch the World Cup and Snooker as a child, so I could be wrong.

I, on the other hand, will be completely glued. It's my birthday on day 5, so I shall be revelling in the swimming competitions at that time. It'll be so good to have the Games happening in the same time zone, so there'll be no sitting up past my bedtime or getting up at stupid o'clock. We didn't get any tickets, but we'll be revelling in the atmosphere.

The London Olympic Committee last week said it was "disappointed" at some of the reaction to the idea of displaying Olympic rings on Edinburgh Castle.  Comments have ranged from "outrage" to "tacky". Even if they are tacky, they'd surely once in a lifetime, history-making tacky. The last time the biggest international festival of sport hit these shores, my dad was 2 and my mum was a few months old. Enjoying this spectacle will be a something we get to do once and we should make the most of it.

Associating an iconic symbol of Edinburgh and Scotland with the Olympics also assists in persuading tourists who are coming to this country for the Games to extend their stay and come north for a few days. We need to take every chance we can to bring money into this country, being spent in our businesses.

Willie didn't give unbridled backing to the plan to put the rings on the Castle - but he did say he was disappointed with the reaction to the plan. He thinks that Scotland has so much to gain from the Games:

“The 2012 Olympics are being held on our doorstep and is a magnificent opportunity, not just for London but for the whole of the UK.
“The rings on the castle may not be to everyone’s liking but the unfortunate wall of negative comment failed to recognise the opportunity for us here in Scotland. “As a sports addict I’m so enthusiastic about the Olympics that I’m prepared to have the iconic Olympic rings displayed on the roof of my bungalow in Kelty. “The Games will have far reaching effects on all parts of the UK with its legacy being felt throughout the country. The tourism and economic benefits will be ripe for reaping as long as we are ready to capitalise on it.
“I am urging Fergus Ewing to silence the doom-mongers and urge Scots to get behind Scotland’s part in the 2012 Olympic Games.
“The Scottish Government needs to play its part to make sure the Olympic Games is something that all of Scotland and the UK can benefit from.”

Knowing how much Willie likes to play sport, I'm surprised he didn't talk more about sports development and the potential for the Games to make sport more accessible for everybody. When we were kids, we'd all get our tennis rackets out after Wimbledon, or we'd play football in the field when the World Cup was on. The potential to get kids interested in such a wide range of sports can't be underestimated. Usually our tv schedules are full of football snoozeathons - this is our chance to bring hockey, netball, volleyball, fencing, gymnastics, swimming and many other sports back into prominence and get kids out in the street playing them. It gets the kids fit and engaged. Can't be bad.

But there's another opportunity here as well - to invest in sporting excellence, to get our most talented young kids the best possible coaching and opportunities. A girl from Anna's primary school is hoping to swim in the Commonwealth Games in 2014 - the Olympics in our country present a great opportunity for her in terms of both inspiration and the chance to give her the best possible chance to fulfil her ambitions.

Scotland's economy, Scotland's athletes, Scotland's people have so much to gain from these Games. We should embrace them with enthusiasm and reap the rewards of doing so.

Willie hasn't commented on whether he wants to see Coal Carrying made into an Olympic sport, though. This picture, taken from this video on You Tube, about 1:50 in shows him about to cross the line in the 2009 Scottish Coal Carrying Championship in his home village of Kelty. 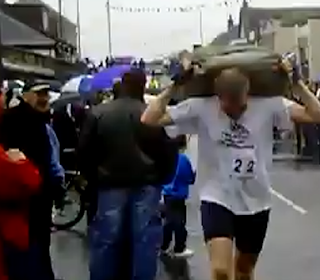 His comment that he'd be happy to have the Olympic rings on his house have won him lots of attention. It would be fine - as long as someone else put them up for him. Anyone who had to listen to the interminable stories of him installing insulation under his floorboards last year will understand why I'm saying that.
Posted by Unknown at 11:13 am

Everybody in England, you mean.

Scotland's good causes suffer for the olympics and thank goodness Historic Scotland has thrown this commercialisation of sport into the dustbin. Sport is not a sport anymore its a money making enterprise as can be seen in the attitude of the English rugby players.

Hang those rings on Buckingham Palace which is more appropriate and Willie can go down and admire them to his hearts content. In fact that would be a good new photo call as he must running out of ideas by now.

CH, I totally agree that some sport is obscenely money orientated - football and rugby and my own beloved F1 are quite obscene these days.

Why can't we just all get together and enjoy the Olympics as an island - it's a fabulous opportunity to bring people together and showcase Scotland too.

Are you seriously not even a tiny bit excited by it?

Are you seriously not even a tiny bit excited by it?

Not one iota from drugs, money motivation the blatant fawning over overpaid 'stars' aided and abetted by all media especially the beeb. The last telly program I watched was that farce of F1 in America over the tyres and I haven't missed the goggle box in any form as I have learned far more from the net. Especially how inept the majority of unionist politicians are and so ignorant of so much yet are involved in our law making.

And an idea for Vince since in the distant past he accused the Tax Avoiders dismantle tax havens and charge 90% on the money held there, it should bring them out of the woodwork as the 50% domestic rate will still leave them some of their hidden wealth.