Catching a Beatle in Liverpool and the Hard Day's Night Hotel

The Adventures of two Beatles obsessives and a Responsible Adult in Liverpool Part One
I may have briefly mentioned in passing on Twitter and Facebook that I went to Liverpool this week with my gorgeous niece Laura to see Paul McCartney perform in the town where he was born. We took a Responsible Adult with us to keep us in order.
We set off before 7 on Tuesday morning. Our different travelling styles were evident from our luggage: 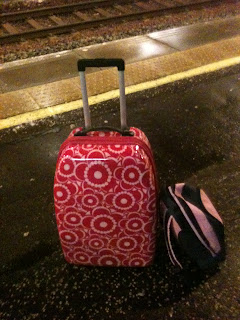 The mahoosive suitcase belongs to Laura and the RA. The rucksack is mine. I took the view that jammies and a change of clothes would be all I'd need. Not that I bother with things like hair straighteners anyway, but I felt that I was going to be in a dark room with several thousand other people and nobody would be looking at me. And, anyway, time spent grooming is time not spent exploring Beatles stuff.
An hour into our journey the sun rose. You can see Laura's reflection in the window: 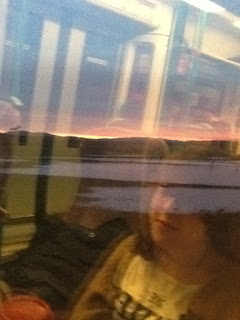 It was round about this stage that we realised that none of us had remembered to bring a proper camera. We knew our iPhones just wouldn't give us what we wanted from the concert, so we ended up buying a cheap Fujifilm effort in the Jessops sale in Liverpool.
While we were travelling, I gave a reference for someone by phone. While I was talking, just for sport, the Responsible Adult texted me 22 times, with a single letter each time, to distract me. We were clearly going to be fine with her looking after us!
We arrived in Liverpool just before 12 and decided to walk through the town centre to our hotel. We don't do this sort of thing very often so we'd decided to treat ourselves to a night at the only Beatles themed hotel in the world, the Hard Day's Night Hotel which was literally round the corner from the famous Cavern Club.
Opened in 2008, it's situated in North John Street. The exterior of the building has statues of the Fab 4 as well as huge photographs.
Inside it's a totally tasteful treasure trove of Beatles artwork and memories. The main feature  of the hotel is  a five floor spiral staircase. Walking down it, you see a timeline with each floor being dedicated to a particular Beatles decade with life size photographs. It's absolutely stunning. I stupidly didn't take any photos on my iPhone and didn't get the chance to download the ones we took on the new camera before Laura took it to Inverness, but I'll post them when I get them.
My room was on the fifth floor and my jaw hit the floor as I realised what I'd be sleeping under. I mean, how gorgeous is this? 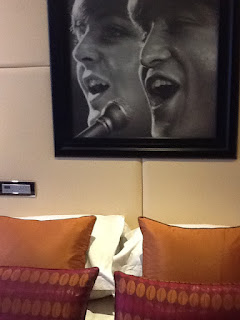 The bathroom was almost as big as the room itself. 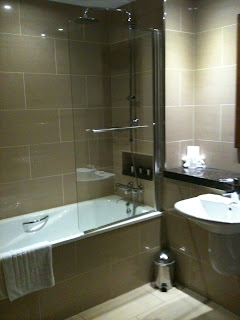 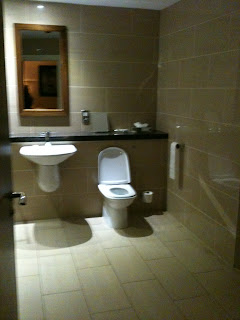 Laura and the Responsible Adult took a room with a view of the Cavern Pub, which is just across the street from the Cavern Club. For some reason I was chosen to be the one to lean out of the window to take this. 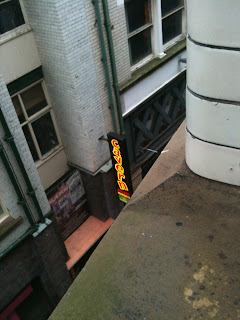 The bed was oh, so comfy - and it is slightly the hotel's fault that I didn't get to spend as much time in it as I would have liked. Although there's a wow round every corner in the place as you see some other object of beauty, we found that the service wasn't quite what you'd expect from a four star hotel.
The bar is waiter service only. The good side of that is that they will never have a drunkenness problem because there aren't enough hours in the day to drink enough, given the length of time you have to wait to be served. We returned, parched, from the concert after midnight and had to wait for half an hour. The Responsible Adult remonstrated on several occasions with the three staff to no avail. They said they were busy. Someone should take these poor delicate souls to a hotel in the middle of a Liberal Democrat conference so they could see just what busy means. There were 3 of them with 8 tables of less than 20 people to serve and they weren't moving around the place with any sense of urgency. The two male waiters were monosyllabic and their attitude stank. The female member of staff was at least friendly and apologetic. It was obvious to us how they could organise themselves better and it was very frustrating to have to wait for so long.
At least we had a pretty tree to look at, though: 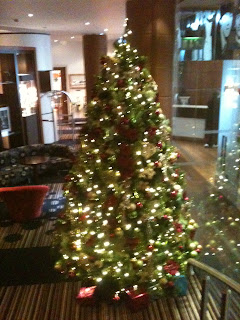 Our wait was made more enjoyable by talking to a lovely couple who'd come all the way from Alaska to see Paul McCartney. They saw both concerts - Manchester on Monday and Liverpool on Tuesday and really enjoyed themselves. They had come all that way for less than a week as they had to get back to spend Christmas with their family, including their baby grandson.
The breakfast was absolutely delicious, but the hotel failed on my Knife Test. I really can't stand it when you are given one knife that you're expected to eat your cooked breakfast with and butter your toast. There is no excuse for such meanness. My love for Earl Grey tea was fortunate because I was given a pot with enough for 3 cups in it while Laura and the Responsible Adult had to ask for a refill every time - and that took a while.
I do, however, judge a place on the quality of its sausages - and this one passed. They were meaty, well flavoured and generously proportioned. They served up tinned fruit, but it tasted lovely. The grapefruit was sharp and the oranges were full of flavour and rich with sweetness. The peaches had a good hint of vanilla in the syrup.
I liked the table decoration, too. 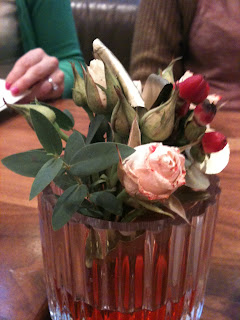 And I want one of these. 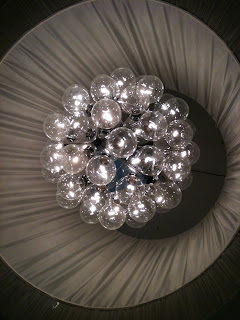 And the view was amazing. 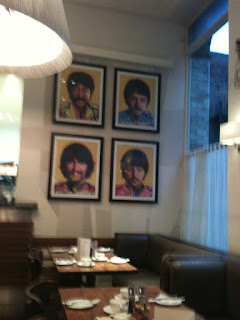 I would recommend the hotel because it is absolutely gorgeous, comfortable and unique. However, they could definitely improve their attitude and service. There's a certain arrogance there - it's almost as if they know they'll get the business so they don't have to bother too much. Their location and artwork are enough to wow a first time, but it's treating people well that makes them want to go back. That's a lesson they could do well to learn.
There are many more tales from this trip to be told, but our Christmas turkey, sadly, is not going to buy itself.
Posted by Unknown at 9:03 am