Tim Farron's Christmas Message - and my challenge to him for 2012

This is the young Mr Farron's Christmas message to all party members and it's everything you'd expect from him. Great to see our Alex Cole Hamilton quoted in it too. 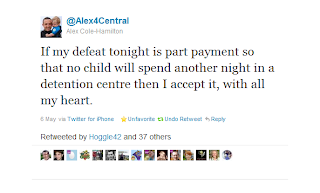 Here's the whole thing for you to enjoy.

Well that was quite a year, wasn’t it?  It was a good one too!

I know, I know, after the referendum and the horrible results in May you’d be forgiven for believing we were sinking faster than Blackburn Rovers (how it pains me to write that), but you know what, it’s not true.

This year we did some amazing things, things you and I have wanted to do for years but never had the power to actually get done.

For one, we put an end to the horrific practice of locking up innocent kids behind bars for months on end in immigration removal centres.

Alex Cole-Hamilton, one of our brilliant MSP candidates who missed out on a seat in May, said that if his loss was in some way a down-payment on ending child detention then “I accept it with all my heart”.

But that was just one of many ways Liberal Democrats in the Coalition put our principles into practice this year.

We took nearly a million of the poorest workers out of paying tax altogether and gave a £200 tax cut not to the rich but to 23m working people.

We gave children extra support to stop them falling behind in school.

We gave pensioners the first meaningful rise in the state pension since Thatcher abolished the earnings link.

Nick Clegg stood up to defend human rights after the riots and for Europe against the Tory right-wingers.

You stood up for the NHS and forced real change.

Would all of that have happened if we let the Tories run the country on their own? I hardly need to answer that.

And we’ve really turned a corner in council by-elections in the last six months, with seven gains, eight holds and just three losses.

So I’m proud of our year and I hope you are too.

Next year will be hard too. We need to carry on doing difficult things and we need to work with our traditional opponents to clear up Labour’s mess and put the country back on track. As Nick said at conference, it’s not easy, but it is right.

So 2012 is a big year for us. A very big year. But our prospects are better than Blackburn Rovers’!


I will allow myself a little whinge - boo to the constant football references. I get the gist but they're tiresome. My challenge to our President for the New Year is to get through an entire Conference speech without one single football reference. I would be loathe to doubt our President's ability to do anything, but I really think he'd struggle with this one.


Also, he missed out how we have made crucial and much needed changes to Housing Benefit - first of all getting rid of the reduction to 90% after a year and on additional rooms and also on making sure people in residential homes don't lose the right to claim the mobility component of DLA. Those are two important examples of how our influence in Government is showing itself.
Posted by Unknown at 12:33 pm