The adventures of 2 Beatles obsessives and a Responsible Adult in Liverpool, Part 3


You may also want to read Parts One and Two of this happy tale. 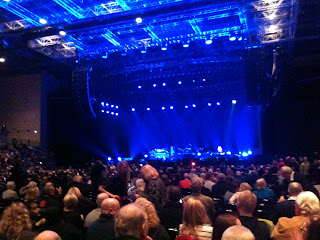 As you can see, our seats were really good. They should have been at £105 a go, certainly, but you can tell how quickly they were going by the fact that I literally bought them seconds after they went on sale and these were the best I could get.

But I'm getting ahead of myself. The last instalment ended as Laura and I were being dragged from the Beatles Story by the Responsible Adult. We went back to our hotel with just enough time for a quick change before heading back to the Arena. Our plan had been to go to Pizza Express just outside the arena, but it was mobbed. I remembered that the nearby Jury's Inn did good carveries, so we decided to head in there and they managed to squeeze us in. Now, I don't want you to think that this was entirely without guilt. It did feel a little bit wrong to be savouring a delicious piece of perfectly cooked lamb before going to see a committed vegetarian.

Doors to the Echo Arena apparently opened at 6, but it was around 7 that we actually joined the queues outside in the rain. It was quite clear that the concert was not going to start on time as it was nearly 7:30 by the time we found our seats and the 11000 capacity arena was only about a third full. Our wait was made easier by meeting the girl from the Beatles Story right in front of us and chatting to her and reading our programmes. Usually these things are overpriced and you don't feel like you're getting value for money. Not this time. Not far off being the best £15 I ever spent: 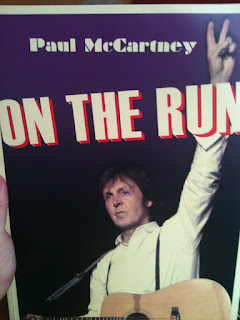 It's crammed full of interviews with Paul McCartney, the band, his family and has all sorts of information about the tour and about the things Paul cares about, like his campaign for Meat Free Mondays. He talks about how he spoke to the European Parliament about it. There's loads of pictures old and new, a big plug for the book of Linda McCartney's photos.

Even thinking about this event still gives me goosebumps. One of the images that will stay with me for a very , very long time is the look on Laura's face when Paul finally came on stage, a fashionable 45 minutes late. It was a really emotional moment for her and it was very special to see her so happy.

It was quite hard to take in that his iconic figure was literally a few metres in front of us. I tended to focus on the small figure on the stage rather than look at the huge screens at the side, just to reinforce the reality of it all.

It really made me smile to see his very shiny new wedding ring from his recent marriage to Nancy Shevell. He was wearing a two piece grey suit, but the jacket was ditched after a few songs and he rolled up the sleeves of his pink shirt to make it all a bit more relaxed and less formal.

Paul McCartney had precious few of the stunts and special effects commonly used by many artists today, but he did have himself and five decades of fantastic music and anecdotes to share. There were a few pyrotechnics round Live and Let Die but that was pretty much it.

He went straight into one of my favourite songs, Hello, Goodbye which, understandably, is a bit of a traditional concert opener for him.

You got a sense of how long his career had been going on and how many of the truly great musicians he'd worked with and been friends with. He talked about how humbled he'd felt when Jimi Hendrix had played Sergeant Pepper's Lonely Hearts Club Band just three days after it had been released. He went on to describe how Hendrix had been showing off and had made his guitar go out of tune. He apparently asked Eric Clapton, who was in the audience, to tune it for him and Clapton told him, basically, to go and get raffled. That song came out the year I was born ,which is a very long time ago.

He talked about writing Blackbird not as a crusading, political song, but to bring comfort and hope to those fighting for civil rights in the States.

He shared a joke he'd had with his little girl, Beatrice about the Royal Wedding (and was quite taken aback when some booed the mentions of the royals). He'd said he wanted Prince William to say "I, Will." A typical Dad joke, I think,

I can't remember what song it was, but he went wrong at one point and they just stopped and started again. He mentioned a prior occasion when Cilla Black had been in the audience and thought it was all part of the script. I was really surprised to hear Cilla being booed by the audience, though, a good Liverpool lass that she is. I'm not sure what she's done to offend her home town. A bit of a search on Google suggests some resentment towards her for at one time being less than hostile towards the Tories as the reported spat between Cilla and Ricky Tomlinson shows.

What was utterly remarkable is that this man at the date of the concert was 69 years, 6 months and 2 days old. He was on stage for over 3 hours, singing 43 songs and he never even stopped for a drink. You can see from the set list below just how diverse a performer he is with songs ranging from Helter Skelter to Oh-blah-dee, from Back in the USSR to yesterday, from Band on the Run to the seasonally appropriate Wonderful Christmastime.

So many of the songs on this list are so engrained not just in the minds of fans but as a soundtrack to everyone's lives. Hey Jude, the song McCartney wrote to comfort Julian Lennon when his dad went off with Yoko had as all standing singing our hearts out, as did All You Need is Love and Give Peace a Chance.


The second encore was all about contrasts. We were jetisonned out of our Yesterday and Mull of Kintyre mellowness (complete with band of piping children from the Loretto school in Edinburgh) by a lively, raucous and loud performance of Helter Skelter. Not that that song could ever be anything other than loud of course.
By the end of the evening, the Responsible Adult had turned. She was still Responsible, but Paul had won her over.
All of these songs, are, of course, available on You Tube to watch any time, but there is no substitute for being there, in the epicentre of that cauldron of emotion, with 11,000 others enjoying, revering, getting lost in the music every bit as much as you are. I'm so glad I took the opportunity to go while I had the chance. One of the themes of this year for me has really been about how important it is to appreciate what you have while you're lucky enough to have it, to seize the moment while you can. I'm glad we seized this one.

Update: How can I have forgotten the part where he sang "Here Today" an imagined conversation he'd have had with John Lennon, written shortly after his death.