Hope you don't mind being ditched for Paul McCartney.....

I may have mentioned this once or twice in passing over the past couple of months, but now the day is almost upon me, I am maybe just a tiny bit hyper. And this is why. 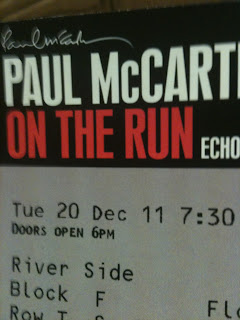 Blogging will be light until Thursday as I'm going to be away in Liverpool, the city where the Beatles grew up and first performed, to see Paul McCartney play in his home town at the Echo Arena.

I was doing ok (aye, right) until I read this blurb about the concert. I mean:


As anyone who has seen it will confirm, the Paul McCartney live experience goes so much further than simply a normal concert.  Throughout, Paul takes his audience on an emotional journey that touches everyone in a different way.  Whether performing to just 200 or 500,000 people, Paul has the ability to connect with everyone in the audience.  When this is coupled with the most envied and respected back catalogue in music, you have the ingredients for a once in a lifetime experience.   On stage, Paul barely has time to catch his breath as he jumps from instrument to instrument, bounds tirelessly around the stage and sings nearly 40 songs - the ultimate value for money show.

Best pack extra tissues then. Looks like we are in for a treat.

We set off before the crack of dawn tomorrow morning. Let's just hope that there are no seasonal mishaps and the trains are running fine because our connection at Waverley is neat to say the least.

I understand that the people I'm going with are taking a suite of luggage - hair straighteners, 15 changes of clothes, the works. I, on the other hand am taking a small rucksack with jammies, 1 change of clothes and a toothbrush. I take the view that, yes, I'm going to be in an arena with several thousand other people but it will be dark and I won't be the centre of attention.

We are staying in the Hard Day's Night Hotel in the heart of the Beatles Quarter. Yes, an indulgence, but how often do you go to see one of the greatest music legends of all time?

I shall, of course, tell you about it all when I get back.
Posted by Unknown at 1:31 pm

Have fun! I'm going to see him tonight in Manchester, and having seen him nine years ago and looked at the setlists from recent shows, I can guarantee it'll be one of the best gigs of your life.

Enjoy! I'm sadly not attending but he is one of my favourites - Yellow Submarine was my first ever disc and I've enjoyed most of his work since. I used to work just along the way from the Cavern in Castle Street - Liverpool is a warm city. Have a good time!