So, Happy New Year everybody. Did you survive the celebrations without incident or hangover?

I shouldn't be writing this right now. We should be at the Winter Wonderland in Edinburgh, but it's blowing a pretty major gale out there so we can't. And it's the last day tomorrow, so we'll miss it. Serves us right for being so lazy throughout the holiday - but we needed it.

Our Hogmanay celebrations did not go according to plan either - which was, basically, lounging on the sofa in our jammies and heading to bed just after the Bells. However on that occasion the change in our plans could not have been more welcome.

We'd gone round to my parents for dinner on Friday night. There isn't really much better food on this planet than my mother's fillet steak and garlic potatoes, washed down with some very acceptable Rioja, Eton Mess made with raspberries, then a lovely squishily delicious piece of Brie followed by coffee and my Dad's Remy Martin. We went home replete and happy very late and hadn't expected to see them again until probably yesterday.

On Saturday morning I innocently posted about the enormous hunk of fillet steak I'd bought for our New Year meal with friends. My niece commented "lucky you" and I suggested that they should just head down here. About an hour later I got a text to say that they were doing just that - packing themselves and their two dogs up to stay at Mum and Dad's for New Year.

So we all gathered in the evening. Luckily Zaika,  the best Indian Restaurant in the whole world is in Livingston so we decided to have a takeaway from there. The funny thing is that although my parents go there often and we are reasonably regular customers, we've never been in together. You have to hand it to the staff there for attention to detail. We went to pick up the mammoth order, which my Dad had phoned in in his name. When they saw us load it into our car, they actually double checked that we were taking away the right order. We were very impressed.

Bob (as the only sober one in the house) was despatched to ASDA because my poor niece didn't have any Cider and, thankfully, he got there just as it was closing to save the day.

The evening passed with fun and games and when the Bells finally came, we all got up for an impromptu Auld Lang Syne - which was brought to a sudden end as we realised that my parents' puppy had her head in my glass of Amaretto.

Ok, so we had to save the puppy from drunkenness, but we could not have had a better start to 2012.

Morning dawned and I started the cooking process. I've made this New Year meal practically every year we've been together, following on from the tradition my mother started some time in the late 70s. Boeuf en Croute - fillet steak wrapped in pate and pastry served with peas, bacon and mushrooms in a cream sauce with little croutons on the top and mashed potato. Followed by a proper, traditional Delia Smith trifle. 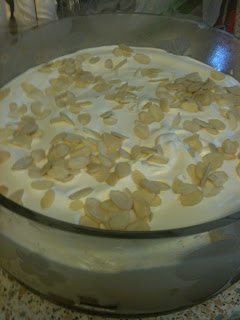 I know I should probably do the proper mushroom and onion thing with Boeuf en Croute, but. because I only make it once a year, I want it to taste the way it "should". I was worried that I'd criminally overcooked it, but, thankfully, when I cut into it, the steak was mouthwateringly rare. Fabulous for me, but I had a frying pan on standby for my friends' piece.

We all had a lovely meal and then decided to play Just Dance 3 on the xBox. This may come as a surprise to some of you, but I comprehensively stuffed the opposition two out of three times. Ok, they may have had more to drink than I, or were 6, but these mere trifling facts should not be allowed to diminish my achievement. Boogie Wonderland and This is Hallowe'en were the songs which provided me with this triumph.

Yesterday, we (at least those of us who weren't ailing from an over indulgence on the wine) went to Mum and Dad's for lunch - beautiful silky lentil soup with home made bread followed by Christmas cake ticked all the right comfort boxes.

We also took this lovely photo of Maya the puppy before her first encounter with the groomer... 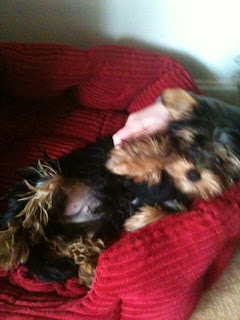 After waving the northerners off for a snowy journey home, we came home and watched some really appalling drama about the life of J K Rowling on Channel 5 before I stockpiled the tissues and settled down to watch Pat's demise on EastEnders. I had thought that once this episode was over, I'd never watch it again, but the reappearance of David Wicks might tempt me.

I'd fast forwarded through many of the Christmas episodes purely because they were so violent and horrific. I found myself in complete agreement with Lisa Northover's post on the dangers of there being so much domestic violence on that programme. It's just not healthy. However, Pam St Clement's acting as her character passed away was absolutely excellent and it was worth watching.

After finishing the leftovers from New Year's Day (and there is still trifle left), I rounded off the evening with a Snowball. There has to be some room for tackiness in every celebration, although the addition of a squeeze of lime juice of course renders this classy and sophisticated. 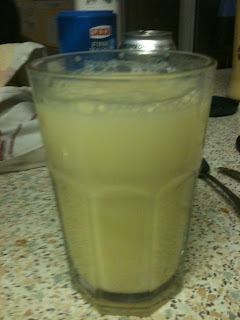 When we lived in England, we always found the rush back to work at New Year highly uncivilised. Thankfully we have an extra bank holiday up here just to ease ourselves in. And before you think we're getting something you're not, we don't have Spring Bank or August holidays.  Anyway, too soon, this is Bob's last day at home with us as he heads back to work tomorrow.

This afternoon, we think, will bring Harry Potter Cluedo and hopefully not too much more battering by the winds. My friend's kids' playhouse looks very precarious at the moment...

And well done to Lily Greenan on Twitter for coming up with the name "Big Gail" for this storm. A much better name than Bawbag, I think.
Posted by Unknown at 1:42 pm

Good lord, I haven't had a snowball since I was about 15 which is, ahem, at least ten years ago. Have they got any nicer?