There are worse things than the Chicken Pox, Michael Moore

I woke on what was already going to be an ordeal of a day, headed for the bathroom and as I passed the mirror realised that I spots were appearing all over me, almost multiplying before my eyes.

That's what happens when you let the only member of the family who hasn't had Chicken Pox look after the child who's just come down with it. Around 3 weeks before, we'd been up for the weekend when my beautiful niece Laura, then just two, came out in spots. My sister was starting a college course the next day and nobody else but I could stay home with her.

The reason I remember the date so clearly is that this was the morning of my beloved Granny's funeral. Warned starkly by my mother not to get any spots on my face before the service, I searched for scarves and long sleeved tops to cover up the offending sight.

I felt lousy. And continued to do so for a good fortnight. It actually took about 6 months for me to feel properly well again.Where Laura had about 40 spots on her entire body, I had that many just on my right shoulder. This is a nasty virus that hits adults far worse than children.

And see when the itch started...... I don't know why but I persevered with Calamine Lotion alone. Nowadays you just dose your child with Piriton to get them through, but for some reason I either didn't know or you didn't use it for that.

The whole thing was a deeply unpleasant experience. So, when I heard that Secretary for State for Scotland Michael Moore had come down with it, I was full of sympathy. I know I'm pretty soft hearted anyway, but I really do feel for him because I know what he's going through.

He needs to respect this virus because it is really nasty, so will have to rest. Every hour spent vegging out in front of West Wing DVDs takes a day off the worst of the illness. Ok, so I have no scientific evidence to back that up, but I do know if you do too much, you'll be iller for longer..

But, there are worse things than having Chicken Pox, as a glance at today's Metro will show.Sloppy, lazy, inaccurate journalism at its best. 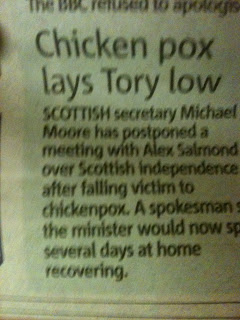 Knowing Mike as I do, I suspect that the horribleness of the Chicken Pox is for him nothing compared to being called a Tory.
Posted by Unknown at 9:02 pm