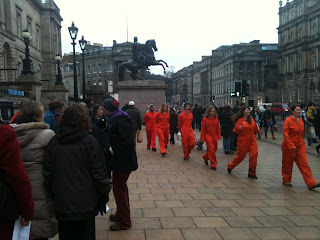 Students in orange boiler suits took to the streets in Edinburgh on Saturday to remind people that last week marked the 10th anniversary of the establishment of the US's military detention camp at Guantanamo Bay in Cuba. This is where 171 men are held, most without any charges being brought under a brutal regime where there have been reports of torture.

Among them is Shakar Aamer,a British resident who's been there almost since the start. He's never been charged with a crime and was cleared for release initially 5 years ago. Why on earth has he not been returned to his family?

Amnesty have produced a report to mark the anniversary which makes grim and unpleasant reading.

I spoke to one of the students who had organised the event and she told me that many people were surprised to find out that Guantanamo was still open. They thought President Obama had shut it.

It just goes to show how important awareness raising events like that are.

Apart from the students in boiler suits, who posed here for me.... 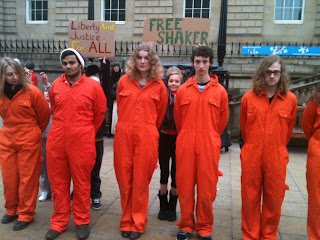 ..... there was a performance by a local peace choir. 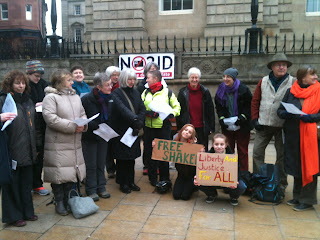 If you're interested in taking further action, you could write to foreign office minister and Lib Dem MP Jeremy Browne to ask him to ramp up the pressure on the US to get Shaker Aamer released.

Also, again if you haven't already, make sure friends know that Guantanamo is still open for business.
Posted by Unknown at 2:29 pm