Willie Rennie "coolly impressive".....says journalist Euan McColm, who is not known for dishing out praise without good reason. 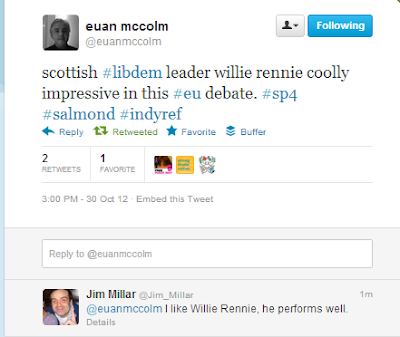 He was speaking after Willie's contribution in the Scottish Parliament debate on the events of last week, when it emerged that the SNP Government had not even sought legal advice from its law officers on the terms of an independent Scotland's membership of the EU, despite them making every effort to create the impression that they had. To add insult to injury, they spent thousands of pounds of taxpayers' money taking the Information Commissioner to Court over the issue. She had ruled that the Government would have to say whether such advice existed.

I wrote last week that Labour had over-egged the pudding on this by making it all about Salmond lying. That gave the First Minister just enough wiggle room. They need to learn that sometimes less is more. Ming Campbell told Scottish Liberal Democrat Conference in Dunfermline on Saturday that:


Alex Salmond may or may not have lied, but he certainly didn't tell the truth, the whole truth and nothing but the truth.

That's relevant because it smashes Alex Salmond's and the SNP's credibility to bits, but the important thing is to get to the exact situation an independent Scotland would face when it tried to join the EU. Would it have the same rights as the UK, or would it have to join the Schengen Agreement, the Euro and all that the fiscal stability pact would entail in terms of budget cuts? The truth of the matter is: nobody actually knows, least of all the SNP. Former Labour Special Adviser David Clark argued last week that favourable legal advice, if available, was one thing, but the realpolitik of getting 27 other states to agree that interpretation was quite another.

So, Willie Rennie's focus is on pinning the SNP down on setting out both the legal basis (which is not the advice from Government Law Officers, but the basis of their assertion) and asking them to provide evidence on the political angle - that their case would be accepted across Europe. It's much more precise than the Labour motion  for debate yesterday. Willie asked for:


in moving forward to publication of the white paper on independence, calls for the full legal case and basis for Scotland’s terms for continued membership of the EU, including consideration of whether Scotland might be required to join the euro or the fiscal stability pact, to be published alongside evidence that the case has been accepted across Europe

That all seems pretty reasonable to me. What is remarkable is that the SNP all voted against it. They rejected the idea of proper openness, with the full facts being known. Their own amendment was simply a load of marshmallow with a bit of bile directed at the Labour Party.

SNP members in the debate didn't so much ignore the ball in play, but they went off to another pitch and started playing with their own ball. They tried to argue that UKIP were going to win the European elections and the UK might subsequently pull out of Europe. Not the most inspiring argument for independence. And then Rob Gibson made some interesting but unsubstantiated predictions about the future of Europe:


The changing EU will be looser, not deeper. It will have new members by 2016. There will be many new nations in the world in that time. Many other nations are vying to become members of the European Union, and that will change the way in which the EU adapts to the new world in which it tries to bring people together.

It's clear to me that Willie Rennie should be a key player in the Better Together campaign. His forensic scrutiny of the SNP, combined with his natural positivity and straight talking will be a huge asset over the next two years. Euan McColm is not the only journalist to be complimentary about him recently. The Sunday Herald this week lamented his absence from First Minister's Questions last week and said:


Since the election, the party, largely through Rennie's ceaseless efforts, has shown it can punch above its weight at Holyrood. Rennie has been ahead of the curve on issues such as the job losses which must accompany police and fire centralisation, and is arguably Salmond's best inquisitor in the Holyrood chamber.


The First Minister's antipathy towards him is a back-handed compliment.

It's been a good week for Willie and the Scottish Liberal Democrats. The launch of the party's Home Rule Commission has given the debate on Scotland's future a kickstart and a potential idea to build a consensus around.