Embarrassment for SNP as it looks like they think they're a one party state...

The SNP campaign in the Liberton and Gilmerton Council by-election in Edinburgh has proved that it's, as Edmund Blackadder would say, at home to Mr Cock-Up. Yes, I know it's a case of there but for the grace of god go we, but if we'd made the mistake, they'd hardly have just sat there and nodded sympathetically.


SCOTTISH Nationalists were today accused of misleading voters after issuing leaflets which talk about an “SNP by-election” and tell people they are being asked to choose a “replacement SNP councillor”.

Voters in Liberton/Gilmerton are due to go to the polls on June 20 to elect a new councillor following the death of the SNP’s Tom Buchanan – but the by-election is an open contest involving Labour, Conservatives, Liberal Democrats, Greens, Ukip, the Pirate Party and an independent as well as the Nationalists.

However, the SNP leaflet says: “Sadly Councillor Tom Buchanan passed away recently and on June 20th you’ll be asked to vote in a local election to find a replacement SNP councillor for our area.”

Voter Kay Jenkinson, 72, said she was shocked when she read the leaflet put through her door earlier this week.

She said: “We know most political parties, if not all, can be strangers to accuracy but this is just ridiculous. 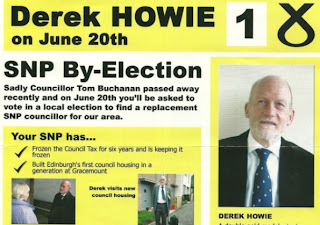 The Liberal Democrat candidate in the by-election is a very nice man by the name of John Knox and there are 3 very good reasons to support him:


1. He cares passionately about providing new opportunities for the young and supports award winning Edinburgh LibDem initiative, the Capital Guarantee to provide traineeships for young people.

2. He is campaigning hard to protecting the Green Belt.

3. We don't need another Labour/SNP councillor - we need a councillor who is going to work tirelessly for the local community - we need John Knox.

I first met him back in the day when I was campaigning for Marilyne McLaren to get selected for Edinburgh South. He's a good bloke and would be a very conscientious, diligent councillor. So, if voters want someone who'll work quietly for them and not think that somehow he has some entitlement to their vote, John Knox is your guy.