Willie Rennie as you've never seen him before

Everyone who knows Willie Rennie will know that he hardly ever stops. Whether it's getting on Alex Salmond's case in Holyrood, fighting for college funding or for the best start in life for two year olds, to travelling from one end of the country to the other encouraging and supporting activists, he's on the go all the time. Resting is not an option for him.  He can probably be described as WTF (Worse than Farron) in that regard. He will always enthuse you to do more work than you thought you were capable of.

He's spent a fair bit of time in Aberdeen Donside recently, supporting Christine Jardine's campaign. It was on a trip there last Friday that he was caught by an activist who had better remain anonymous doing something you don't normally see. 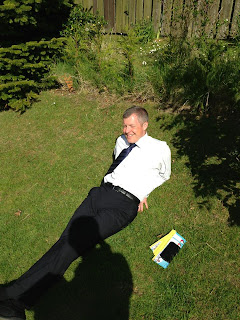 This uncharacteristic lounging around did not last long, however,  and he was soon back on the doors talking to voters.

The campaign HQ at 8 Scotstown Road is open every day and can be contacted on 07516 450672 or hq@christinejardine.com. I'm hoping that as it's Aberdeen based  Liberal Youth Co-Chair Kavya Kaushik's 23rd birthday today, that everyone reading this will knock on 23 extra doors or make 23 extra phone calls in her honour. Contact HQ and they will give you the VPB code. If you can't go, you can donate here.

I was in Donside on Saturday and found that Christine's message was going down very well on the door. People feel that the SNP has let Aberdeen down, taking money away from the city and putting them in the central belt. They don't have much enthusiasm for the Labour candidate or council either. They like that Christine is fighting for Aberdeen to get its fair share of government money and investment and for nursery education for 1000 2 year olds in the city, while the SNP only provide it for 40.

One thing that was very clear was that people really don't want independence. They're happy for the Holyrood to have more powers, but they want to stay in the UK.

We did have some amusing encounters on Saturday. On the first street we went to, I reckon you could have found a quorum for the Scottish Parliament. In just a few steps we counted 5 MSPs, including Willie Rennie and John Swinney. It was quite amusing that we'd all decided on that street, the longest in the constituency, on the same day.

Yet again the young people in this party are doing us proud, with LYS members Hannah Bettsworth, Daniel O'Malley and Euan Davidson spending most of their time on the campaign trail. First there was EastLY, then there was GoldGuard during the county elections and now Donside helping Christine.

From a personal point of view, this was a return to an area that I spent a bit of time in as a student. I got a harsh reminder of the passage of time on Saturday. When I first arrived I went to a church that met in Oldmachar Academy which was all very new then. I remember it being out in the open a bit and very visible from the road. Not any more. It's pretty much surrounded by mature trees. It really doesn't seem like almost 30 years ago.
Posted by Unknown at 1:46 pm