On the wall in Christine Jardine's campaign headquarters, formerly a pet shop, just out of interest, there is a poster where people have written why they have come to help. Here it is in glorious technicolour. 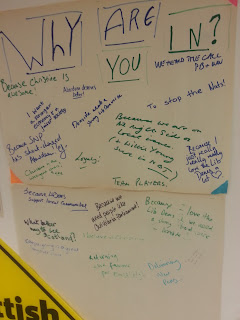 Some of the best are:

Because the SNP have short-changed Aberdeen

Because Christine is awesome

I believe in Christine

Because I just really, really, really love the Lib Dems a lot. (I'd put money on Liberal Youth co-chair Kavya Kaushik having something to do with that one.)

To stop the Nats

Christine is the intelligent choice

Returning the favour for Eastleigh

Whatever motivates you, you would be given a very warm welcome in Donside over the last three days of the campaign at Team Christine Towers at 8 Scotstown Road. The phone number is
07516 450672 or you can email volunteer@christinejardine.com.

Christine is an amazing candidate. She has knocked on thousands of doors over the last few weeks and her no nonsense, Aberdeen first attitude has been very well received. We also could not have asked for more from Liberal Youth Scotland. They have really stepped up to the plate and have been an intelligent, hard working,  integral part of the campaign. We are so lucky to have them.