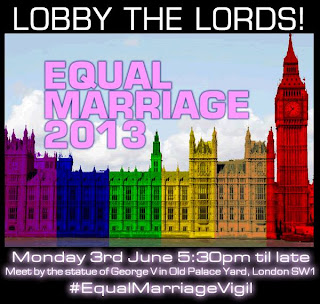 The House of Lords debates the Same Sex Marriage bill on Monday 3 June. They will address the general principles of the Bill before voting on a Second Reading.

When the matter was debated in the Commons two weeks ago, I was saddened to see that so many of my friends were upset by a protest against the Bill.  Think about how it feels to be lesbian, gay, bisexual or transgender and to see people demonstrating outside Parliament to exclude you. They tell you that they think that your relationships are somehow less valid. It makes me feel angry to see my friends put through that sort of discomfort. Love and commitment between two people who want to spend their lives together is the same, so it's clearly logical that everyone should have access to the same legal recognition.

That's partly why I'm so glad to see that there is an equal marriage vigil taking place outside Parliament from 5:30 pm on Monday. I would so love to be there, except this 400 miles' distance thing is a bit of a problem.

Monday also marks the second anniversary of the death of Andrew Reeves, the much loved London campaigns officer and then Scottish Director of Campaigns. I've been thinking a lot about how he would be feeling about the process of the legislation both at Westminster and Holyrood. He's been a much missed presence at every vigil, every march we've been to. I'm sure he would have been very proud of everyone from Willie Rennie, Nick Clegg and Lynne Featherstone to LGBT+ Liberal Democrats who have done so much to turn this Bill into a reality.

Wherever we are in the country, I hope all supporters of equal marriage will take part in this vigil in some way, whether by tweeting (or  using any other form of social media), blogging or organising local events to show support. It's also important that we politely and reasonably make the case to the Lords and ask them to support this Bill. Even if they don't personally agree with it, they should not stand in the way of equalising the rights of others, especially as the Commons has voted it through with such a stonking majority. Many people in the Lords will remember the day when it wasn't just legal, it was commonplace to discriminate on racial grounds. The changes in the law have done much to improve things, although there's a long way to go on that front, too.

Oh, and a note to people on the vigil, if you happen to see Secretary of State for Scotland Michael Moore anywhere near Parliament, sing Happy Birthday to him.
Posted by Unknown at 10:56 am