Today has been my second 21st birthday. We're spreading the celebrations over several days because I just don't have the energy to do them all at once, but today has been good. A leisurely lie-in reading lovely messages from friends on Twitter and Facebook, and a book about Michael Schumacher. It was particularly fabulous to see that Bob and Anna had stayed up until midnight to specially write on my Facebook wall.

I eventually got up and opened my pressies - some books and the Torchwood Children of Earth DVD, but the best one was the voucher for unlimited hugs and the cards which Bob and Anna had spent ages decorating. Here's Anna's: 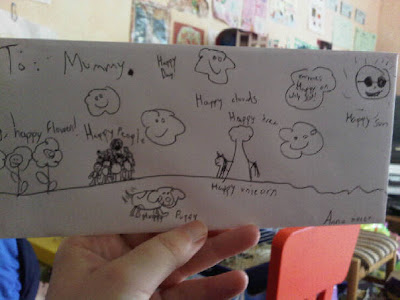 My sister and her four children came round for lunch, bringing it and a cake with them. I feel so sorry for poor Laura who, at 16, has just come down with Glandular Fever and has a horrid dose of Tonsilitis as well. She's so brave with it even though she feels awful and is in horrendous pain. It's been a traumatic Summer holiday for the family - her brother had his appendix out the last week of school.

Uncomfortable (but in a funny way) moment of the day came when my sister's ex husband came to pick up two of her children for their holiday with him. He was telling us about his new house and was standing in our kitchen, which, to be honest, had seen tidier days, talking about how dirty the house was when he'd moved into it. I kind of felt like my kitchen was under the scrutiny of Kim and Aggie and wanted the floor to swallow me up.

By the time they left, I was pretty exhausted so I lay on the sofa for a while and we decided that we'd have the special meal we'd planned tomorrow or Sunday. We've just eaten and I am having the first glass of red wine I've had in 6 months. And very nice it is too. All hail Tony Laithwaite. By the way, if you ever want to buy some cases of wine by mail order, this is the company to go with. Their call centre is the friendliest ever. I grant you, they do have a nice job, it's not like they're the tax people, but they cannot do enough for you. I hope we haven't dented their profits too much as we haven't really been buying wine this year cos I've been too ill to drink it.

Thinking all the way back to my first 21st birthday, that was spent similarly surrounded by family and friends. We went out to Kavio's, a brash but friendly Italian in Leith. Then, I had no idea that 26 days later, I'd be married, but that's another story.
Posted by Unknown at 8:05 pm

Email ThisBlogThis!Share to TwitterShare to FacebookShare to Pinterest
Labels: Family

Happy Birthday. Glad to hear you are enjoying it :-)

Happy birthday Caron. I thought it was just part of your plea bargaining on Malc's blog so I didn't wish you it then.

May you have many more without many of your health problems.