A Future Fair for All: Take 2

Just in case you missed take 1, telling you how slightly tipsy I was, here it is.

When we heard the slogan, Stephen's mind went to free fall.

Mine, well, I thought fair couldn't possibly mean what we Lib Dems mean by fair.

If it was, well, then people undergoing Cancer treatment wouldn't be told they were fit for work.

People wouldn't be placed under virtual house arrest without being told what they were being accused of.

Children wouldn't be locked up in immigration detention centres.

The poor wouldn't have got poorer and the rich richer and the gap between the two stretched.

I mean, this lot have had 13 years to sort that out.

No, it has to be a fun fair they are talking about. One with stalls, and waltzers, and a helter skelter and a bouncy castle and candy floss and goldfish - and stocks where we can throw custard pies at Gordon Brown or guacamole at Peter Mandelson - and a coconut shy. 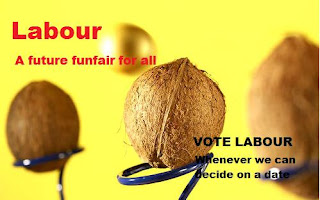 The idea is from my head and beautifully brought to life by Stephen.

Thanks also to Labour for choosing a slogan that is just so mickeytakeable - it almost makes "Have you got the guts to vote SDP?" which many of us in SDP Students had to endure in 1986 seem vaguely adequate by comparison.
Posted by Unknown at 11:59 pm

Future fair for all said...

I think that it is more an admission of thirteen years of failure, rather than a slogan for the future