Books: The Fault in our Stars by John Green 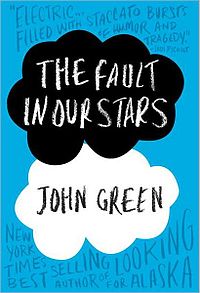 Anna was really keen that I should read this book by New York Times bestselling author John Green. She had it the day it was published and has re-read it several times since, almost like the character Hazel does with her favourite book which provides a pivotal part of the plot.

TFioS is an extremely well written assault on the emotions. Unlike other young adult bestsellers, there's not a sparkly vampire or a fight-to-the-death Olympic style event for children in sight.This is all about the relationships that form in a support group for teenagers with Cancer. There is no potential for escapism at all.  There is no suggestion that the process of death or living with the effects of the disease is easy. Green conveys the physical and mental agony of approaching death with a realism that struck fear and panic into my heart. If it's hard for a young adult to read, it's excruciating for a parent. While this book moved me to tears, Green cleverly ensured that, within a couple of pages, I'd be laughing. He placed the most emotional scenes in the book close to the funniest or most preposterous. There is one particular incident involving eggs that is both poignant and hilarious.

The central characters, Isaac, Augustus and Hazel are all extremely likeable. Keris suggests that Green's teens are not like any teens she's ever known. For me, Green's teens have quite a lot in common with the nerdfighters, as his army of fans are called - occasionally (well, quite often) pretentious, quite geeky and looking for answers about life, the universe and everything. I loved the strong friendship that develops between the three of them, built on mutual support and gallows humour. They complement each other beautifully. The love story between Hazel and Augustus is exquisitely written. It's a complex cocktail of emotions, beautifully described.

There are aspects of the trip to Amsterdam, a place this book has reawakened my desire to visit, that are completely and utterly unrealistic. I suspect a genuine wish granting organisation would have kept a tighter control of proceedings and wouldn't have let two vulnerable teenagers within a million miles of a boorish, alcoholic man. I'll let that one go, though.

I did feel a bit sorry for Patrick, the support group leader. He tried his best, bless him, but the kids relentlessly took the mickey out of him and didn't quite appreciate him enough.

Reading TFioS has made me want to read the rest of John Green's books. I won't have far to go to find them - they're all neatly stacked by Anna's bed.
Posted by Unknown at 11:17 am