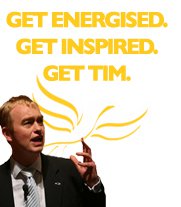 Blogging has been light and may well continue to be so over the next few days. This is purely because it's the school holidays and I'm having some Mummy and Anna time. I also seem to be having a lot of sneezing time this morning, much to my annoyance. I won't be able to avoid some comments on the Spending Review, and I'm thrilled that we've kicked the replacement of Trident into the long grass - a big Lib Dem win for the coalition - but I'll be quieter than usual.

However, just in time for the Presidential Election ballot papers to slip through the doors of Party members (and a particular hello to the thousands of you who have joined the Party since May and are doing this for the first time), that nice Tim Farron has produced this video to entertain you in my absence. It's all very nice and atmospheric with music and everything and I think it shows why we need him as President. I think he has, and will have, his finger firmly on the pulse of the Party, being accessible to members and he is exactly the type of no-nonsense bruiser we need to cut through the bile our opponents are throwing at us.

The Party's having an online hustings tonight at 7 pm, chaired by The Divine Ms Duffett from Liberal Democrat Voice. We'll be able to see it on You Tube later, but you can submit questions in the comments thread here by 5pm today.
Posted by Unknown at 7:41 am

Unlike his record on gay rights.

No doubt, I wouldn't have voted the same way as Tim on that one, but he is being supported by many LGBT campaigners - and atheists alike. I reckon that someone who has the support of both Sara Bedford and Evan Harris is worth backing -mainly because he'd be the type of terrier president we need at the moment.