Caron in London: The Doctor Who Experience 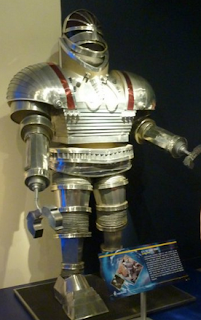 Last year, Anna and I went to the Doctor Who Exhibition in Newcastle and I wrote about that fantastic experience here.

Part of the reason for the trip to London was to go to the new Doctor Who Experience at Olympia. We were booked in at 11am last Wednesday morning. Because of a fairly major failure on my part in understanding the transport system, we arrived, a bit frazzled, on the Number 10 bus from Kings Cross, which had taken us on a very picturesque tour of the city, 20 minutes late. I was really worried that we weren't going to be allowed in, but the staff could not have been more pleasant and friendly.

The morning's trauma wasn't over as my phone rang just as I was about to turn it off before we went in. I was  so worried to see it was my friend Anne who was looking after our rabbits. My fears that Benjamin and Patches had suffered an untimely devised proved groundless, thankfully. Anne had inadvertently set our burglar alarm off and needed to know how to make it stop.

That drama over, we entered the exhibition. We were invited to sit down and watch a film. I'd noticed a bit of a crack in the screen and wondered at first if it was some sort of flaw in the equipment. I'm not going to spoil the surprise, but it was part of an interactive adventure in which we got to fly the TARDIS under the instructions of the Doctor himself (via video link). There were lots of fantastic special effects and an encounter with some old enemies - exciting even for adults.

I had wondered if the exhibition would be much the same as last year's - but there weren't that many duplicates. While last year's was mainly of post 2005 exhibits, this one goes much further back in history. They say never meet characters from your childhood, but I was thrilled to see the big fella in the photo above, the Robot from the 1974 story which was the first I ever watched. It's not bad for 37 years ago - and you can see him in action here:

We were completely suckered in to the "have your photo taken in front of the green screen" money making effort and are now the proud owners of two pictures of Anna piloting the TARDIS and hanging outside the door kind of like Amy Pond in The Beast Below. I know, it's £15 we'll never see again, but in our defence, it was £12 for one, and they are lovely and unique photos. 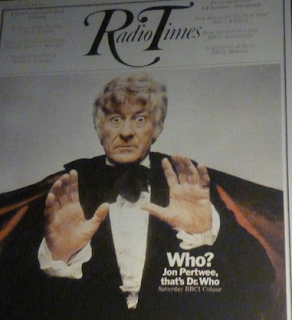 There were a selection of Radio Times hoardings for each Doctor.

Along with each Doctor's costume. Here's my favourite.

There's similar for each companion in the new series. The one of Elisabeth Sladen and the notice of her untimely death earlier this year made me cry.

I was particularly pleased to see a display of Daleks through the ages, from this guy from 1967: 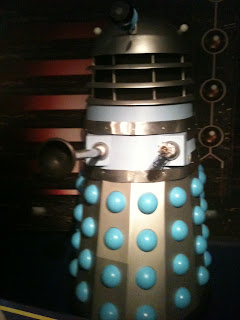 He was actually on the tv last Saturday afternoon in Day of the Daleks.

But my favourite, apart from the "would you care for some teeeeeeeeeeeea?" brigade from last year's was the Special Weapons Dalek from the 1988 story Remembrance of the Daleks. 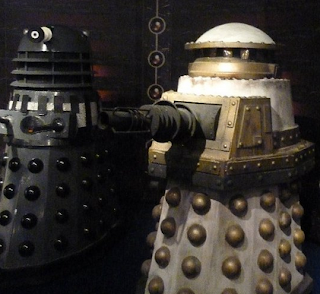 And then there was the Big Daddy of em all: 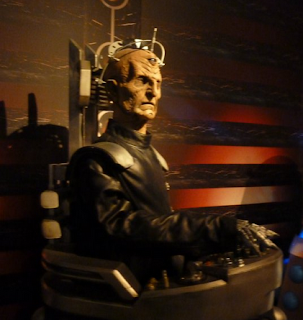 I was so petrified of him as a child - always so glad to see the back of him, and desperate to see him again.

And I remember when the TARDIS was modernised in 1983. How eighties can you get? 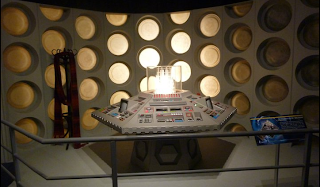 The exhibits were bang up to the present day with a couple of silents from this year's yet to be completed series. 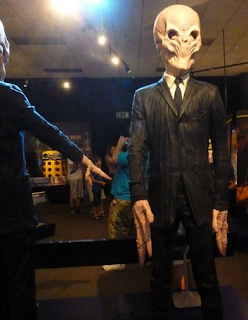 And I kind of like this silhouette of a Judoon. 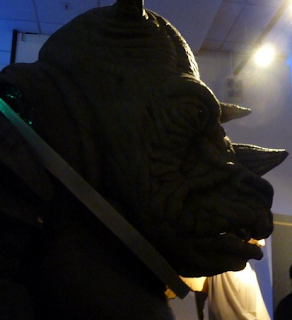 They had gangers as well from this year's series, but we seem to have omitted to take photos of them.

There were a few interactive exhibits as well - you could play around with the theme tune, or have your voice mutated into that of a Dalek or Cyberman. Particularly poignant was the story of Delia Derbyshire who turned Ron Grainer's original Doctor Who theme into the electronic masterpiece it became. It was good to see the BBC finally, too late, acknowledge her contribution.

This was a fantastically enjoyable experience. Even Bob, who's not that much of a fan really, enjoyed it.

What made it particularly fun was the enthusiasm and friendliness of the staff. They were keen to answer questions, or chat and really looked like they were enjoying themselves and were keen to help and give information.

The one annoying factor was beyond the control of the organisers. Works on the underground in the run up to the Olympics led to the closure of the tube station right next door. You have to go to Barons Court as well and try as I might, I couldn't find directions from Barons Court to Olympia. Both Olympia and Transport for London should think about this as the exhibition wasn't as crowded as I thought it should be. I wonder if they've taken a hit because of transport inconveniences.

The exhibition is at Olympia until 20th November and you can book tickets here.

Email ThisBlogThis!Share to TwitterShare to FacebookShare to Pinterest
Labels: Doctor Who