The proof that drinking will make me ugly

You may have seen my post a couple of days ago in which I expressed my concern about the new Scottish Government campaign aimed at getting women to reduce their alcohol consumption because too much wine makes them ugly. The intervening two days have not made me any happier with this tactic.

It's bad enough when newspapers and celebrity magazines ridicule people who don't conform to a certain standard of beauty - you'd think it was a crime even going out without make-up, for example. There's a multi squillion cosmetics and beauty industry persuading women that their natural state is far from desirable. If that was the case, how on earth we managed to reproduce before there were the likes of Clarins and Revlon I don't know. For the state to latch on to that sort of poisonous culture, though, is totally reprehensible.

I hadn't been able to download the iPhone app when I wrote my original post. I have now and it only adds to my concerns. Facebook is full of teenagers rating each other for looks, a practice I find extremely worrying. Now, the Government has provided a handy app which distorts someone's features. The potential for its use in bullying is clear. I know it's not the only app which does that, but it's one which comes from the Government and that makes me feel very uneasy.

The app itself shows a mirror surrounded by lights and invites you to choose or take a photo. You then position it on the outline and it shows you what you might look like if you have 1-6, 6-10 and 10+ glasses of wine a week. Here are mine. I'll leave it to you to guess which is the real and which is the distorted image. 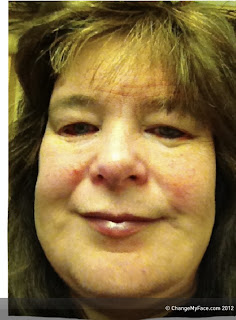 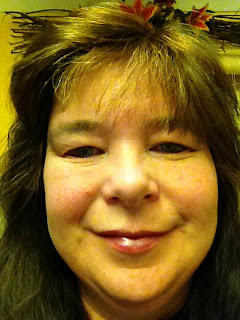 One thing that worries me is that there's nothing within the app to signpost you to where you can get help information about alcohol consumption, or the key messages of the campaign. If you push the words Drinking Mirror, you do end up getting taken to the website, but you'd have to know to do that.

This campaign is aimed at women like me who like the odd glass of merlot at the end of the day. Frankly, what most women like me want is extra energy cos we all have so much to do. I know that I have more energy when I avoid alcohol and I wonder if that wouldn't be a better focal point for such a venture.
Posted by Unknown at 1:12 pm

Hi Caron, I intended to come and post here ages ago. I'm in too minds about this.
On the one hand, the whole you must look pretty to be worth anything vibe just stinks. Especially as either the drinkers will be so young they don't think it'll happen to them or, like me, already have deep wrinkles, red cheeks and weight gain.
On the other hand, anything that helps to tackle Scotland's so damaging drinking culture has to be worth a shot.
Sorry to be woolly.