Last week I read a mouthwatering review of the Mexican street food restaurant Wahaca over on Katy Riddle's Feel-good Foodbook blog. Her photos and write-up looked so enticing and as I had to go to London for FE on Monday, I decided I had to try it out.

Well, the first thing I have to say is that Katy can write a cracking review. She was bang on about the quality and flavour of the food. It was absolutely delicious. I went to the Covent Garden branch which is about 15 minutes' walk from Westminster. You can't book a table, but, although the restaurant was busy, I was served straight away and the staff were very friendly. Nobody looked at me oddly for being on my own.

After an interesting and intense 3 hour meeting, I wanted to relax with one of these: 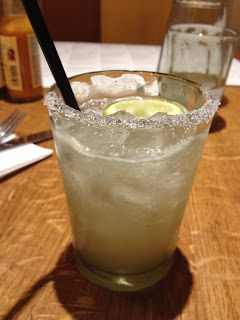 I think I must have been drinking the wrong kind of tequila before because this had a much richer flavour than any I'd had before.

I decided to order Chicken Taquitos - spicy chicken in deep fried tortillas with salsa, sour cream and cheese on top. It looked very pretty and, like everything else I ate, had an almost perfect balance of flavour and texture. The crunch of the tortilla, the spicy heat of the chicken with the sourness of the cheese and the coolness of the  cream with the crispness of the lettuce. It was the sort of food it made me happy to eat. 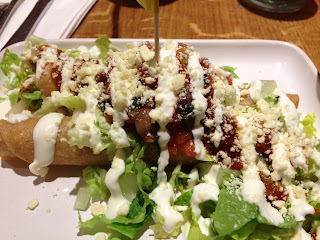 I'm not a huge lover of beans, but Katy had gone on so much about the Frijoles that I really had to try them. They gave a warm, carby hit that would keep me feeling full and satisfied for a good while and I loved how they looked when the cream was all marbled in with the beans. 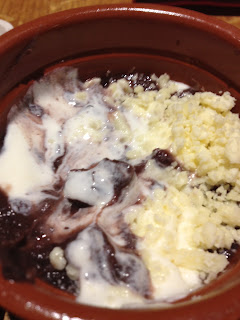 I can't ever turn down guacamole. It's one of my favourite foods and I've tried many different versions over the years. Wahaca's stacked up both in looks and flavour. A good amount of spice with cool avocado, sour lime and flavoursome red onion. 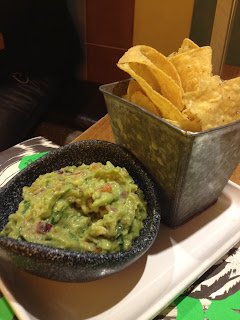 After all that, I was quite full. But after a few minutes I decided I could fit in another dish Katy had recommended - the salted caramel ice cream. Again it was perfectly balanced. Often when I've had salted caramel stuff before it's been a bit too salty, but this left in a bit of balancing sweetness. I also liked the fact that they gave me a spoon that matched my Kindle. I doubt it was deliberate but it appealed to me. 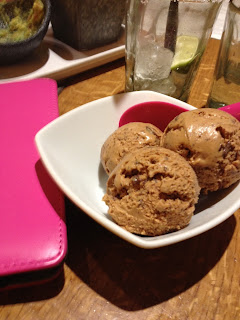 The decor kind of makes you feel like you're eating with the sun on your back. I liked the white brick walls, the metal shutters, the faux stone banquettes and the brightly coloured tiles. 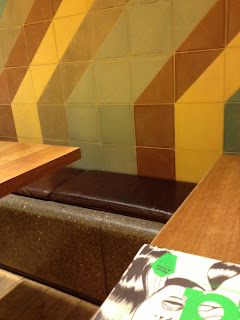 The atmosphere was not a million miles away from the Zumba class I need to work this lot off. The music was loud enough to cheer but not too loud to inhibit conversation.

One thing that struck me was that children were clearly welcome - not just from the stack of high chairs which were not in use at 10pm on a Monday night. 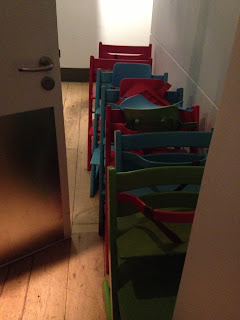 The menu marks off which dishes might be too spicy for kids and recommends you ask your server for advice. That was a good touch.

All of that  delicious food and drink cost me just £20, which for central London wasn't bad, I thought.

One thing I would have liked to have seen was a statement on tipping policy. There's no service charge if you're in a party of less than five, but I'd still like to know that any tip I give is going to go to the staff and not the pockets of the owners.

I'm half tempted to go the Canary Wharf branch next Monday night when I'm down again. Any of my London friends fancy coming with me?

Hi Caron!
Completely agree with you on quality and value of food at Wahaca - big thumbs up! Also totally agree re tipping policy. Have created a site to address this issue and visited Wahaca yesterday - www.whogetsyourtip.com.