Some things are more important than Iain Dale and his lists

As I said yesterday, I'm really happy to have risen 23 places in the Total Politics Blog Poll and am so grateful to everyone who voted for me.

However, that result is not the most exciting thing that has happened to me in the last 48 hours.

There are indeed much more important things than Mr Dale, or his lists, not that you'd think it from a brief look at the blogosphere.

Imagine my excitement, while recovering from the exhilaration of seeing the Brawn boys (and it was Rubens who got top slot, yay!) reclaim their rightful place at the top of the leaderboard in the first free practice session of the European Grand Prix, at getting a Follow Friday on Twitter from this lot! 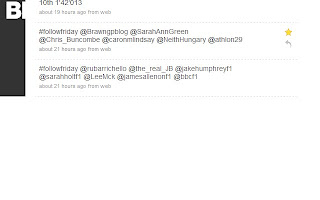 (The provision of this image is possible only after Stephen responded to my plaintive cries for help on Twitter this morning. I almost had to send him a DM asking him where Paint was, but thankfully I found it on my desktop:-))

For those of you not familiar with the custom, it's tradition on Fridays in the Twitterverse to recommend people whose tweets you enjoy reading. I had a feeling that a Twitter friend of mine with contacts "on the inside" might have had something to do with it, but they are denying all knowledge.

Anyway, whatever I did to deserve it, it did cheer me up incredibly. So thanks.

And as if that wasn't enough, Stephen phoned at the back of five to ask if he could come to visit. A few minutes later, he appeared with this 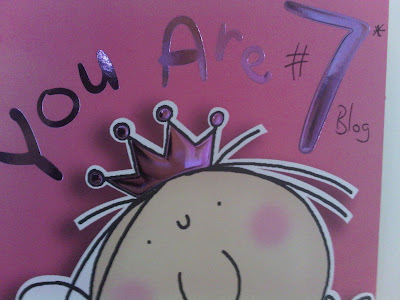 and these which I thought were going to be disgusting, cos I hate haggis, but if you read the ingredients, there isn't any in them. They are, in fact absolutely delicious.

He stayed for food and wine and as usual he royally entertained my daughter. Anna adores him because they seem to be completely on the same quirky wavelength. A few months ago, he came over and I went to bed cos I was feeling so ill. When I reappeared 3 hours later, they had invented a Kingdom, drawn out a map and made up its laws. Not bad for an afternoon's work. Last night, I again got quite tired so I was lying on the couch listening to them act out Build A Bear's Got Talent (with Stephen doing the voices for all 3 judges), and then Stephen telling this shaggy dog story that seemed to go on for ever. At one point I had to intervene, hissing that this "better have a happy ending" when a bunny was fatally injured. However, Anna, who adores animals and hates the thought of anything bad ever happening to them, was laughing all the way to the really bad punchline.

So, thank you, Sugar Daddy, for a lovely evening. Remarkably, there's still a little bit of chocolate left, so I'll savour that during free practice this morning.
Posted by Unknown at 8:39 am

Of course should I become King Stephen of Haggis, Neeps and Liberalism again next year you have a hard act to follow your maj.

*genuflects and pays homage in the presence of the Queen*

We don't need to go for this genuflecting stuff. That's so Feudalism 1.0.

Occasional supplies of chocolate will do fine:-)