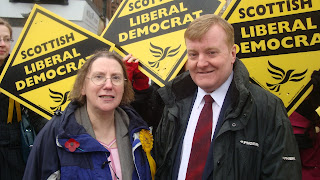 On Friday former Liberal Democrat leader Charles Kennedy joined Scottish Liberal Democrat candidate Eileen Baxendale to chat with local people on Alexandra Parade. Charles, of course, has long held connections with Glasgow. He went to University there and is now the University's Rector, the voice of the students on the governing body.

Charles has been an immensely popular figure inside and outside the Party for a very long time, and always will be.

His visit came the day after the SNP and Labour candidates had what seemed to be a really snarky, negative debate on STV. I'm very grateful to Andrew for his blow by blow account because I just can't stay up that late these days. Labour and the SNP have spent most of the campaign arguing about things which in the scheme of things nobody cares about. I'm certain that a family struggling to pay their bills after losing their jobs, or struggling in poor housing with a leaking roof or damp which sets off their children's Asthma really don't lie awake at night thinking about where David Kerr was born.

The thing is, if Labour and the SNP can focus their campaigns on issues like that, they don't have to account for the ways in which they have failed to deliver in Government at Westminster and Holyrood.

Where Labour have mucked up with the abolition of the 10p tax rate penalising the poorest, Eileen Baxendale has been campaigning on the Liberal Democrat pledge to ensure that you don't start paying income tax until you earn £10,000. That will save the average household around £700 a year with the poorest benefitting most. That's a reasonable sum of money - a couple of months' rent on a private flat in Springburn, for example. When you consider that the Council Tax on a Band C property in Glasgow is £1428.06, then that £700 is a big help.

Labour have also decided to make it much more difficult for rail passengers to get to the North East of England by scrapping direct trains from Glasgow to the East Coast Main Line. Also on trains, the SNP have decided to scrap the Glasgow Airport Rail Link which was part of the successful Commonwealth Games bid.

If Glasgow North East chooses Eileen Baxendale next Thursday, they'll get a hard working MP with the experience to help with the area's problems. As a social worker, councillor and community regeneration expertise, she's well placed to make a real difference to the area.
Posted by Unknown at 4:36 pm