It's not just Doctor Who who has a birthday today

Jennie reminds us that it's the good Doctor's 46th birthday today. Strictly speaking, though, that's not quite true as we all know that he's over 900 years old. Come to mention it, I'm sure I remember Tom Baker's incarnation saying he was 749 in around 1974 so I've no idea how he's managed to gain over 150 years in less than 30.

My husband, who was 12 at the time, remembers watching the first episode live on that Saturday evening in 1963. Consequently, his favourite Doctor is William Hartnell. He loved his grandfatherly magic.

For me, I just fell in love with Tom Baker when I was 7 years old. The very first episode I ever watched, against my will, was Planet of the Spiders where Jon Pertwee regenerated. It was some sort of school holiday, I remember that, because I was with my cousins in my Granny and Grandad's tiny two roomed flat watching it on their black and white tv. I was hooked from that moment on and was really scared by the Robot in Baker's first full story. Watching that as an adult, I laugh that it made me tremble with fear. Sarah Jane Smith became my role model and I just wanted to be her. So far I've been a spectacular failure in that regard, having neither established a career in journalism nor battled one single alien. It is, however, no coincidence that my daughter's middle name is Elisabeth.

I remember being completely enraptured by Tom Baker's eccentric, enthusiastic, sometimes child like Doctor. Here, because I'm nice, is a clip from that first story, complete with Sarah Jane. She was wearing a hat, for goodness' sake!

I could go on to write about how I missed out on a lot of the Peter Davison years first time around because I was so scunnered that Tom Baker wasn't in it any more, but I really got back into it for Sylvester McCoy's second season. His was a wonderful, comic portrayal of the Doctor which got progressively darker. That season was an absolute corker - daleks and cyberman in separate stories for the 25th anniversary were incredibly exciting. It was, of course, that year that daleks first levitated for the first time.

I could also tell you about how fantastic it has been to share Doctor Who with my own daughter. David Tennant is "her" Doctor and she's totally dreading his departure next month. We've both thoroughly enjoyed the Sarah Jane Adventures, too and she's as captivated by K9 as I was at her age, although she sees him as very old fashioned looking and I thought he was cool and futuristic. 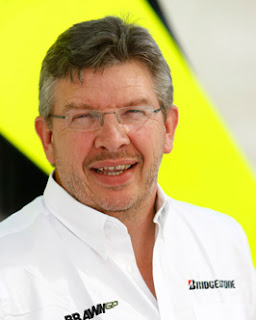 Celebrating his 9th birthday on the day Doctor Who was first transmitted was Formula One's resident strategic and technical genius Ross Brawn, whose eponymous team won the Constructors' Championship in its debut season this year which I may just have mentioned in passing once or twice. He's just given himself a nice birthday present by selling a majority shareholding in the team he bought for a few euros in March to Mercedes for many millions more. I hope, by the way, that Brawn GP doesn't mind me whipping his photo off their website.

So, Happy Birthay to everyone who's ever been responsible for the Doctor, and to Ross. I'm sure that both have a lot to give us in the future and as both move on to new eras with Matt Smith and the new Silver Arrows Team, I wish them good luck.
Posted by Unknown at 3:28 pm

Email ThisBlogThis!Share to TwitterShare to FacebookShare to Pinterest
Labels: Doctor Who, Ross Brawn

There used to be a thing on OG tracking the Doctor's age and having him at about 1250; certainly he was 900 in Colin Baker era (he mentions his 900th birthday cake in RotD). Unfortunately OG has gone bye-byes so I can't link to it.

What you have to bear in mind is that the Doctor's televised adventures are not, and have never been presented as being, everything that happens to him.

Nine (and certainly Ten) are going through midlife crises and lying about their age.

Funny how for a lot of people, "Planet of the Spiders/Robot" is their first taste of the good Doctor, certainly David Tennant is on record as saying this is his first memory.

My earliest memory is the Daleks story transmitted 30 years ago in September, rocky outcrops, Daleks and the very wierd looking Morvellians. I can also remember watching "Logopolis" in my Grans living room as well.