Blogging may be light due to cupcakes, cute baby animals and the like

If you got past that headline, you probably aren't just a hardcore political type, so I can tell you a bit about what Anna and I have planned for the school holidays.

Despite having the opportunity for a lie in, I wasn't delighted to find myself awake and ready to get up at 8am today. I suspect it'll be a while before herself puts in an appearance.

We had a really lazy weekend - I found that the constant busyness of the past few weeks were catching up on me. I felt pretty rubbish and even fell asleep during the Korean Grand Prix. I wasn't even watching it live at stupid o'clock in the morning.

Yesterday we had two extra children and our plan was to go to the cheap kids' cinema thing at 10.30 am. Well, we got there in good time to discover it had been already sold out for ages. Anna and her friend went to see Footloose a bit later on. I actually dropped them off at the complex on their own for the first time ever while I took her friend's six year old little sister to the Almond Valley Heritage Centre. We've had a membership there for most of Anna's life so we're regulars as she loves animals.

My little friend and I saw the seven week old baby goats, full of fun and little goatly cuteness. There was also the tiniest little rabbit that we hadn't seen before. It was literally half the size of the guinea pig that it was next to. I asked one of the staff about it and apparently it was just what they call a peanut, a tiny, but perfectly formed little bunny. Its siblings were all normal sized. My little friend was more fascinated by the various birds than we usually are. She also beat me fairly comprehensively at the Hoop-la game in the barn. I blame the cold - it was a truly horrible day yesterday.

We also had the fun of a ghost hunt for Hallowe'en. The Centre is having their annual "Fright Night" on Friday 28th October which is usually quite a spectacle with lots of people dressed up in scary costumes and the October holidays usually see some sort of spooky activities. Personally, though, I don't think they've ever surpassed the Ephie McGloom and the Underpants of Doom displays of a few years ago.

Once we'd picked up the older girls, they decided they wanted to try their hand at cupcakes. Red velvet cupcakes to be precise. We went to the supermarket to pick up ingredients from a hastily remembered recipe. What I'd forgotten is that the last time I used my long suffering electric hand whisk it had blown up and I hadn't replaced it. I remembered after I'd measured out the butter and sugar for creaming. Elbow grease it had to be, then. The girls did most of the hard work, but baking by hand is a lot easier than it used to be. However, we will have a new mixer by the time we make our Christmas cake later in the week.

We used this recipe as it was closest to the ingredients we had amassed. We didn't have buttermilk, so just used ordinary and it was fine. 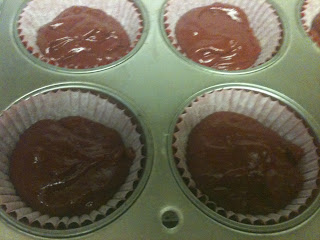 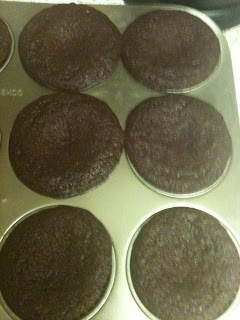 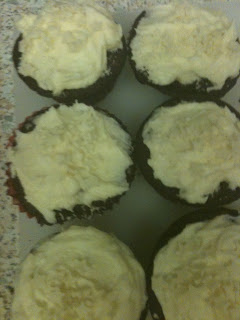 To be honest, I'm not the biggest cupcake fan on earth and these were a bit sweet for me - but given that baking is usually a precise art and we had been less than precise, they were pretty good. The frosting is simple buttercream given that the girls couldn't face the thought of using cheese in icing. They'll learn.

We have trips to the zoo and museum planned for later in the week and also we have to do boring things like get Anna's Winter boots. By the sound of it, Winter's going to be long and horrible. We'd better make the most of whenever there isn't snow.

So, I may not have as much time as usual to talk to you. I know that whenever I say that, I usually end up doing more than usual, but I am going to actually try to take a proper break. I have a huge pile of books to read so I should try to make some inroads into that. So, I should be back with you full time next Tuesday. See you then.
Posted by Unknown at 8:46 am

Cheese? In icing? What is this madness? :)

George, have you never had carrot cake? That's got cream cheese in the frosting.

And if you think that's mad, wait till I start the annual "Do you eat cheese with your mince pies?" debate and have half of Twitter feeling nauseous and a few brave souls sticking their heads above the parapet and saying that they love it too, only to be ridiculed:-).

George, have you never had carrot cake? That's got cream cheese in the frosting.

And if you think that's mad, wait till I start the annual "Do you eat cheese with your mince pies?" debate and have half of Twitter feeling nauseous and a few brave souls sticking their heads above the parapet and saying that they love it too, only to be ridiculed:-).

Ohhh, you're talking about cream cheese. I thought you meant adding cheddar or red leicester to the icing which would be yucky IMO. But cream cheese is a brilliant tool in cake making :)