The debate on whether Scotland should become an independent country or not is one which will go on for the next few years until the referendum takes place. However, there's one phrase I'm already sick to death of hearing.

You don't even have to disagree with independence to have this phrase used against you - all you have to do is ask a legitimate question.
You see, even asking questions, probing for detail, is "talking Scotland down" according to Government ministers.
This is absolute nonsense. I can't speak for everyone, obviously, but most people have huge ambitions for Scotland, whether they want us to leave the UK or not. There is a world of difference between disagreeing with, or even questioning, SNP policy and denigrating our nation.
It came as no surprise, therefore, that when Willie Rennie raised the issue of research funding, Nationalists were falling over themselves to accuse him of talking Scotland down and scaremongering. All they actually need to do is provide a cast iron guarantee that Scotland would be better off in whatever aspect is being questioned. But they can't, so it's much easier for them to cast accusations and aspersions instead.
Yesterday, Willie Rennie flagged up that Scottish universities get, at the moment, £210 million a year in funding from UK sources. Clearly, if we weren't part of the UK, those sources of funding would no longer be open to us. Mike Russell's response amounted to "ach, it'll be fine" with no evidence to back that up whatsoever.
His comments on Twitter, though, about the Liberal Democrats, referring to us as "Fib Dems", are an utter disgrace. He should remember he's a Minister and not a cybernat attack dog. 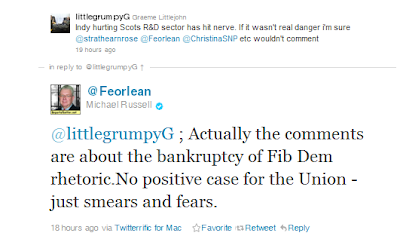 Let's have a wee look at what Willie actually said:

“Scotland is at the cutting edge of research and development work in the UK. Our universities are doing work which is producing technologies which the applications for could almost be limitless.

“The expertise exists in Scotland, but we could not do all of this exciting new research without the extra bonus funding that we receive from across the border.

“The real danger of splitting Scotland from the UK is that you also split our universities from this vital source of funding which helps to fuel the innovation. We do not want to see a repeat of ‘Silicon Glen’ or cause a brain-drain to better funded projects south of the border.

“Scotland is punching well above our weight in terms of funding. I am puzzled why the SNP would want to jeopardise this. Mr Salmond cannot guarantee that there would be alternative funding sources to fill the funding gap of £210 million every year.

“It is clear that remaining a strong and prosperous part of the UK is best for Scotland’s bright future in research and development.”

Basically what he's saying is that we make up 8.5% of the UK Population, but we attract 14% of the available UK sources of funding - showing that we are doing better than we would expect.  Definitely not talking Scotland down, then. All he's saying is that the SNP can't guarantee that that funding would be replaced under independence. That's fair enough.
I'm sure that if the SNP had guarantees, or substantive answers, to these legitimate questions, they wouldn't have to resort to such intemperate language. If they want to make their case for independence they really should put up rather than tell others to shut up.
Graeme writes on a similar theme here, and also takes to bits the latest SNP claims on independence in the process.
Posted by Unknown at 10:59 am

I am getting bored with it as well and getting bored with the Lib Dems raising it at every opportunity. Seriously, is this all we can offer Scotland? Or the really strange FMQ about Scots soldiers? Where is our vision for our nation? Where is our vision for the local authorities in Scotland? We have limited time and resources and this approach will achieve nothing, I repeat nothing, in May next year. I want a party leader leading us into that election, not esoteric and limited questions about the referendum which is likely to be after the next GE anyway.

Also, I would like to see more evidence of the claim that we would lose that amount. Academic research is global so in some respects Independence won't put some of the research funds at jeopardy. The more nuanced issue of EU membership could though. And, if an independent Scotland has a more considered immigration policy than the UK there is the chance that international academics could come here to work and bring funding with them.

Independence referendum ‘could be a good thing’ claims leading businessman

Listen to the interview Caron and then read the BBC's interpretation linked to in the above article!