Tower Bridge to open in act of remembrance

One of the fabulous things about being an MP or working for one is that you get the chance to take good ideas from constituents and make them happen.

In two minutes' time at 11am on 11.11.11, 91 years after the Armistice that ended World War 1, the nation will stop to honour those who have been killed in armed conflict.

Whether you agree with a particular conflict or not, it's right that we honour those who have given their lives. and stop to think about the children who grew up never knowing their fathers, about the parents, grandparents, uncles, aunts, friends, partners who had to go on without them.

Today, there will be another element to the nation's act of remembrance. Tower Bridge, an iconic landmark, a global symbol of the UK, will open for the two minute silence. The reason this is happening is because Robert Smith MP took forward an idea brought to him by a constituent, Eric E Sangster. Mr Sangster had been in London near Tower Bridge one 11th November and had noticed that the traffic didn't stop.  When he told Bob Smith about it, he wrote to the relevant authorities asking if the Bridge could be opened and here we are today.

At this moment, Mr Sangster will be poised to operate the controls himself. This photo shows Bob Smith and Mr Sangster at the War Memorial in Banchory and was taken and is reproduced with the permission of Bob Smith's office. I hope to have some more of the actual moment of the Bridge opening later. 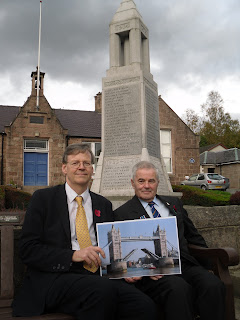 I think this is a great idea and hope that it continues every year.
Posted by Unknown at 10:58 am

Three comments on this Caron, if I may.

My first is that you are right that taking forward constituents' ideas and making them happen is a very good thing. Far too many people, once elected forget all about what the job is: ie that they are elected from our number to represent us. Far too many of them believe that they, as the law makers, are a breed apart.

My second point is that respect is only respect when it is shown voluntarily, or as it were, out of respect. Forcing people to stop driving over the river makes them LOOK as if they are respectful, but it doesn't make them respectful.

Thirdly I'd just make the point that The Times yesterday noted that in the same week Cameron was claiming all sorts of victory over Johnny Foreigner on the matter of wearing the poppy on the England strip (won thanks to intervention from William Cambridge), his MoD was cutting huge chunks of funding from several military charities.

There's a lot more respect in funding the poor guys who have been blown to pieces than there is in the wearing of a poppy, or indeed the lifting of a bridge.

But Caron the nation won’t stop will it? This is just gesture politics at its very worst. What is the point of stopping the traffic on one bridge? Mrs Thatcher thought the M25 was a Great British achievement, why don’t they put up road blocks at 11am and stop all the traffic on their as well? If they want the nation to stop at 11am then they ought to give everybody a half day so that it can be commemorated properly.

First of all, can you tell me something? Are Tris and Munguin the same person? I'm a bit confused.

I'm really sad that you think this is political posturing. A symbol, at an iconic location is entirely appropriate.

We are not celebrating something to be proud of here and Cameron's comments did make me wince - we are remembering those men and women who were killed, honouring their families, many of whom lost several members and publicising the poppy, the sale of which raises money for ex service personnel who need help.

Re MOD cuts, well, I'm sure we all wish there was enough money around not to cut anything - but at least the coalition has given the lowest ranks a pay rise and made sure that their leave starts when they get back to the UK, not when they finish their shift in Afghanistan.

Are you real Caron?

Read from the horses mouth.

It's nothing more than political posturing remember how many put the wreaths on their expenses. They called the rioters scum for their actions if only some unionist politicians could climb so high.

Firstly Tris and Munguin are not the same person. I would have thought that the different styles would have made that glaringly obvious.

Caron can you get off the patriotic high horse for a minute and tell us all why inconveniencing people in London who have to get to meetings work etc at 11am is not a gesture? And please don’t play the “I’m really sad”, or “you don’t care about these people” card as that just will not wash!

I'm not Munguin, Caron. I'm surprised that anyone would ever think that. Yes, we operate from the same blog, but our styles are like chalk and cheese.

I simply repeat my assertion that respect is something that has to be felt. It cannot be imposed, regardless whether it is respect for the monarch, a teacher, a parent, an elder, a priest or a soldier.

Those who wish to show respect for dead soldiers, or indeed for others fallen in the course of their duty, police, firemen, social workers, etc, must have the opportunity to do so, but respect is devalued by being forced upon people.

Our state shows respect by having a member of the royal family, the first minister and other politicians perform publicly; that is as it should be. It is right that the state respect men who were forced away from their families to fight a war they knew little about, in the most awful conditions, and were treated so incredibly shabbily by the British state upon their return: their families left to starve, or depend upon charity.

I note you chose not to respond to the fact that your government in England is hell bent on reducing the grants it gives to military charity.

I wonder if you'd care to comment on that or indeed on today's revelations that they are paying off wounded soldiers.

Sir Robert Smith MP for West Aberdeenshire and Kincardine has absolutely no business whatsoever having a bridge in London opened thus inconveniencing a whole pile of people in who have never heard of him and are anxious to cross Tower Bridge to get to meetings, work etc. If he wants to make pointless gestures to trumpet his pro Britishness let him restrict them to inconveniencing people who can go and see him at his surgery to tell him how cheesed off they are about it and who can ultimately ditch the bad baronet for the SNP at the next election.

As for Tower Bridge being a Great British icon. Sorry to disappoint Caron but I used to live near there and the number of people who thought it was actually London Bridge was frankly unbelievable.

This is simply a stupid, pointless gesture by a member of a marginalised and demoralised party that is desperately grasping at any straws to make its self heard. Sir Robert is probably sweating blood thinking that his party will continue to be wiped off the Scottish political map at the local elections in May and eventually sweeping him away as well when independence or the next General Election comes. And finally Caron shame on you for making political capital out of this when there are so much more pressing things to blog on such as army personnel being made redundant by your coalition.

The tone of some responding here is a bit disappointing but I do wonder about this "gesture". Trains were still running, traffic was still going over the three road bridges over the Forth.

Stopping traffic at just one place because it is possible to do so is, frankly, meaningless given the number of people who were still on the move at 11am.