An afternoon at the Beatles Story

The adventures of two Beatles obsessives and a Responsible Adult in Liverpool, Part Two


(Part One of this merry tale is here)

After a suitable break for Christmas, I thought I'd continue telling you about our adventures in Liverpool last week.

The first thing I want to say is that we all pretty much fell in love with Liverpool. It's such a warm city. I don't mean in climate, as although the papers all said it was unseasonally warm, we spent most of the time freezing. The people are incredibly friendly and open, though and the cabbies don't try to rip you off. Slightly frustrating was a trip to the Liverpool One shopping centre and finding that those toys which you can't get for love nor money up here were piled high. This was after I'd sourced a particular Moshi Monsters thing from the internet and paid over the odds for it for my niece. If only I'd known....

When we arrived we walked from Lime Street station through the beautiful town centre. We loved the fact that it was pedestrianised from the station right to our hotel.

We were peckish after we'd checked in at our hotel, so we went in search of lunch. We ended up eating from street stalls pretty inexpensively. The Responsible Adult and I had mustard chicken and garlic potatoes from the French themed one. It was absolutely delicious, piping hot and well cooked. We loved it.  Laura had a Thai Green curry from another stall which also looked fresh and appetising.

We then decided to head down to the Albert Dock. I was old enough to remember the days when This Morning was broadcast from a studio there and weather forecasts were broadcast from a map of Britain floating in the water. It annoys me now to look up and discover that it's 15 years since they broadcast there. I surely can't be that old. The studio itself is now a bar called Pan Am. 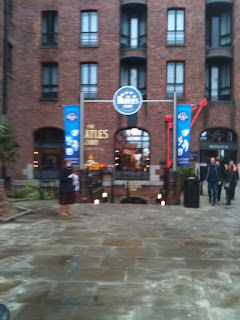 We then headed to the Beatles Story, which describes itself as an "atmospheric journey into the life, times, culture and music of the Beatles". I guess we've become quite accustomed to very interactive exhibits, but in this place there's none of that. You have an audio guide and there are thousands of things to look at that. You can make your way round at your own pace. We had a couple of hours in there and for Laura and I it was nowhere near enough. Like wide eyed, excited children, we pored over things like the programme for the fete where Paul McCartney first saw John Lennon (though they didn't actually meet until the gig that evening), letters written by Brian Epstein,a suit donated by John Lennon for his waxwork at Madame Tussaud's. Now, while every single object was a delight to be examined from every possible angle for us, the Responsible Adult soon got bored. She was very patient and, to her credit,  it took her nearly 2.5 hours before she snapped and hustled us out of there lest we be late for the concert. 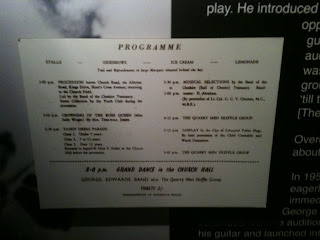 The exhibition took us on a chronological journey through Beatles history, starting with a mock up of the Casbah club - a right dive if the formica table and packets of Marlboro are to be believed. We went through the Cavern years, the Epstein years, sat on a mock up of a jet while watching footage of them arriving in the USA and looked through the periscope of the Yellow Submarine. There weren't many places to sit down, but the exhibits provided some opportunities before we unfit people almost collapsed from exhaustion. We lived through the psychedelic era and the pain of the eventual split before the celebrations of the 4 as separate artists since.

I want, actually need,  to go back there, because I only managed to properly pore over about 10% of the exhibits to my satisfaction. The staff there are also really friendly and knowledgable, probably because they are fans themselves. As it happens, one of them, the lovely Charlotte, was sitting right in front of us at the concert and her devotion to Paul was very clear, shall we say?

A place run on Charlotte's level of enthusiasm and love for the Beatles can't be bad.

And now, a wee test. Two photos of the Cavern Club stage. Which is real and which is the mock up in the Beatles Story? 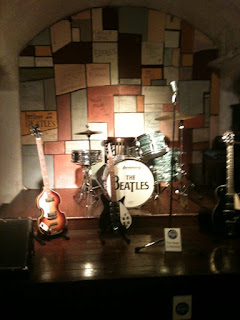 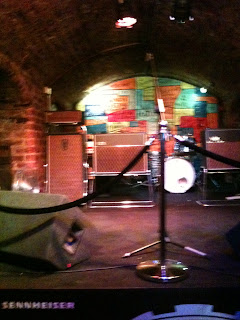