It's quite something when a front bench spokesman goes a fair bit off message in public and no journalist covers it. Although to be fair, it found its way onto Twitter (not by me or any other Lib Dem) and Nicola Sturgeon retweeted it. 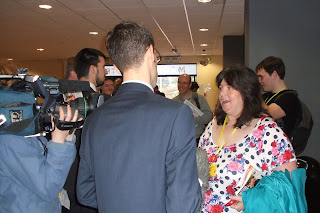 If you google for the Scottish Liberal Democrat Conference in Dunfermline on Saturday, you will find pretty slim pickings. It's not that journalists weren't there. I have proof. Look at this photo of me being interviewed for STV News.

Maybe the reason there is so little in the papers is that, apart from that one, very welcome, off message moment, the Party was in really upbeat, happy form. You might expect that, five months into coalition with the Tories, people would feel a bit nervy, maybe even slightly truculent at the thought of the Holyrood elections next year.

Not a bit of it. We actually didn't need Tavish to say to us "Don't feel inhibited by our opponents, feel liberated by our record", although it was good that he did, because we were kind of there already. The mood was genuinely upbeat and positively buoyant. I probed a few people fairly robustly to check that this was for real and not just the calm before the spending review storm.

Every Conference I've ever attended has been reported in the press in a completely different light to what actually happened, but this time the journalists don't seem to have uncovered anything they could even stretch to a report of a rift.

I'm going to keep my powder dry and not write too much specific right now. That's because they're letting me loose on Liberal Democrat Voice later in the week as guest editor for a day and part of my contribution will be some snapshots of the day in Dunfermline. The articles I've asked people to produce are starting to come in and they're good.

So, for now, just a little teaser of some of the highlights of the day for you:

The single best debate ever at any Conference I've been to in my life. Every speech, on either side, an absolute corker - and the subject matter will be very relevant tomorrow;


the agenda having to be hastily rearranged after a Cabinet Minister removed the need for the debate after his speech by announcing something better than the motion under discussion;


the aforementioned off message moment.

Ok, I'll let loose on the last one. In the Long Term Conditions Alliance Scotland fringe meeting, in response to a question about tobacco control, Ross Finnie said (actually, whispered gently) that he didn't think the Party had fully accepted the problems caused by abuse fo various substances and that he was not fully supportive of the alcohol policy agreed by our MSPs. I'd say that most of the Liberal Democrats in the room nodded their agreement and Cllr Tim Brett, number 2 candidate on the Fife List said it out loud. I've heard a fair bit of feedback from members across the country and I'd say that there is a huge majority in favour of going along with some sort of minimum pricing arrangement. Maybe it's about time the group started to listen to its health spokesman who is one of the wisest, most liberal people I've ever come across.

One thing I did discover on Saturday - I saw a Conference attendee's badge in the name of a Hollywood star, so if that person ever decides they want to come along, they don't need to stand in a long queue and wait to register. Anyone fancy a guess at who it might be?
Posted by Unknown at 6:28 pm

Caron - I won't reveal the name of the Hollywood star and spoil it for everyone, but to give everyone a clue it is not a lady....

On the minimum alcohol pricing issue I am afraid I disagree with Ross on this because the very people we are trying to stop drinking and becoming a nanny state in the process will pay the price irrespective of how much it is.

I know the media seems to be acting as if it never happened. Maybe it's because we weren't at each other's throats. Oh well it was still a good conference never the less.

The debate on education was perhaps the best. I am glad we kept free tuition.

Certainly take Andrew's point and that could well end up being the result of minimum pricing. Still worth trialing at least I think.

There has to be an emphasis on education. We should be educating on the dangers of alcohol abuse from around the time sex education begins. Start to tackle a cultural problem before it has time to take root.

I agree with Andrew on this - like he says, the people who need to reduce or stop drinking will simply pay more, and while those who can afford it will simply absorb the extra into normal spending, those who can't will continue to pay the extra and something else from the household budget will suffer. Tim & I have had a couple of debates on this in the Fife Lib Dem Group already!

LOL I've just noticed that in the background Ruaraidh is taking the picture of me and Michael with Tim. I'd forgotten we were about to ask you to do it when STV grabbed you.