I'm sure Duncan Greenland, Andrew Wiseman and Tim Farron were under no illusions that their announcement on Liberal Democrat Voice that accreditation has been approved would be met with universal acclamation within the Party. If they were, they'll probably be crying into their beer now. The lack of sensitivity, the inference that those of us who oppose accreditation don't care about the safety of staff came straight from the Jeremy Clarkson School of Charm. It was only ever going to outrage people.

So, a few observations.

However livid I might be with Tim Farron for putting his name to that deeply hurtful LDV article, you can't deny that when there's flack going round, he doesn't hide. He was out there facing his critics last night. And given that he'd just chaired a meeting of the Federal Executive, you have to admire his stamina. There was one fairly robust exchange with my fellow Federal Committee accreditation refusenik, Justine McGuinness. 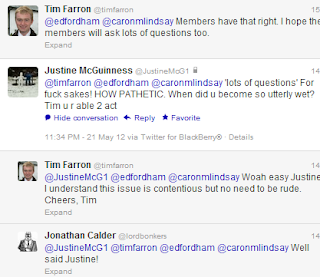 He did, however, sit on there for hours and hours answering people and asking them to e-mail him.

Elsewhere on  the blogosphere:

Dan Falchikov does not mince his words;

Gareth Epps is as shy and retiring as ever. He also points out that some FCC members were not happy at the decision being made by FFAC and FE. They had expected to consult and then make the decision themselves on Saturday. I had thought that FCC had kicked it on to FFAC which could be seen as a wickedly clever move. Why make an unpopular decision when you can get the least accountable Committee in the Party, which has more MPs than elected representatives, to do it for you? Maybe I was being unfair in that assumption. However, I am in no doubt that if FCC had decided not to implement accreditation, somebody else, whether FFAC or FE, would have become involved.

That Saturday meeting of FCC seems like it's going to be interesting. Will there be resignations? We'll have to wait and see.

Complicity argues that the need for accreditation could actually put some people in danger.

Liberal England is not impressed by the insinuation in the LDV article.

Jennie remembers the words which brought her into the party.

A View from Ham Common says that Tim Farron is playing the Shirley Williams role.

Stephen Glenn says the case for accreditation is unproven.

Nick Barlow says that this issue is worth taking the time to consider.

And, finally, I made up a Storify thingy which took the best of the comments on both sides from Twitter last night.