UK Uncut should not have been protesting at Nick Clegg's house

I have been absolutely appalled by some of the stuff I've seen from supporters of UK Uncut in defence of their protest outside Nick Clegg's house.

Some people think that, because children are having to suffer the impacts of cuts in benefits, that Nick Clegg's children are fair game. Like they had any influence in the tough decisions of Government that have to be made. Have a look at some of the comments on Richard Morris' New Statesman piece.
Others think that it was just an innocent street party and 400 people turning up in a quiet residential street was just fine. The Clegg family was not home - but what if they had been? What about their neighbours? Whatever you might think about Government decisions, politicians' partners and children should not have had their lives disrupted.

Imagine if they had been home when these 400 people descended? The children are 10, 8 and 3. To a 3 year old, people outside having a go at your daddy, however nice they think they're being, could be really scary, the stuff of weeks of nightmares.

Now, note that I am not saying that such protests should be illegal, but with rights come responsibilities. UK Uncut have done their cause no good whatsoever this weekend - and that's a shame because when it comes to some of the welfare reform cuts, as you know, I agree with them.

UK Uncut will have had to have distributed Nick Clegg's private address to a fairly large number of people, for a start, the 400 there and anyone they tell. How can they guarantee the conduct of every single person who would turn up. It was ok this time, but at some point, if this continues, someone will turn up with malevolent intent.

I have an extremely low opinion of The Scoundrel Formerly Known as Sir Fred Goodwin, but when protesters attacked his house in Edinburgh, they were not making a point. They were committing acts of vandalism.

Patrick Harvie, leader of the Scottish Greens, told me on Twitter to get a grip when I suggested that Saturday's protest was completely out of order. I wonder how he'd like it if they were outside his house and he needed to go somewhere. But then Patrick Harvie has never taken any Government responsibility in his life. 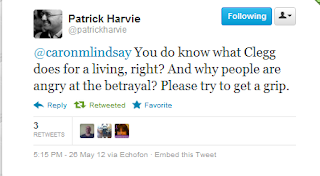 My local SNP Councillor Andrew Miller took a different view on Facebook. He's happy for me to quote him here:


Surely being a politician is his job, not his life. Protest, harass and harangue him all you like when he's at his job but leave him alone when he's at home or any other personal time. People have an easy target in politicians but how would anybody here feel if it was decided to be acceptable that customers from your every day work were allowed to come to your house?

Nick, himself, has been much more measured about the whole thing than I am. He said on Andrew Marr yesterday that he didn't really feel he should comment on it, but said that he and his wife had deliberately decided not to move into a Government flat because they wanted their kids to have a normal life. It would be a shame if they had to disrupt their lives because of the intimidating and bullying tactics of protesters. And that's what it is.

All Governments are protested against - and so they should be. When it turns personal, and private worlds are invaded, including those of innocent neighbours and family members, it goes too far. It becomes intimidation. That's not the sort of country we want to become, whatever the issue.

Apparently, according to some, the protesters are justified because the people live in £1 million houses. That they think they're fair game makes it all a bit more sinister.

Many of the people who've lost their ESA or will lose DLA have a point. I would be there with them. But never, ever outside a private home.
Posted by Unknown at 9:32 am

I entirely agree with you Caron.
UK Uncut also believe they have the right to protest by trespassing on private property, as they did at Fortnum & Mason, breaking through a police cordon. They claim their protest was non-violent, but I cannot see what is non-violent about breaking through a police cordon and a mass trespass which interferes with a legitimate business. Therefore it is a pity that our party's motion F21 on Civil Liberties (passed at Gateshead in September 2012) appeared to condone such aggressive conduct and proposed the repeal of the law on aggreavated trespass.

UK Uncut are not the kind of people that help old ladies across the street so of course they would have little concern for someones kids.
And as for that green. There was no betrayal. Nick Clegg said he would form a coalition with party with the largest number of seats if there was no majority. Everyone knew this and it was a likely outcome of the election.

That’s all well and good but Nick and David trot their wives and children out at politically convenient moments for a photo call and so on to make them look in touch with family values or some other blarney. When do we ever see Alex Salmond doing that with his wife? Never because he does not use her to augment his own image, I don’t even know what she looks like. If Nick does not want his wife and family in the spot light then he should not use them to bolster his own failing public image.

Just look at the political capital he has been able to make out of this on the Andrew Marr show, where he made the ridiculous assertion that street parties scare young children. Does that mean he will equally disapprove of all the street parties his government is encouraging people to have up and down the land to celebrate Brenda being 60 years in the same job?

Please can you tell me exactly when Nick Clegg has used his wife and family for political gain? Or said anything about family values?

And the street parties this weekend will normally be made up of neighbours and people the kids already know.

Manfarang, there was no betrayal for all sorts of reasons, not least that Nick was talking about need for spending cuts in 2009.

Caron I know her name and I know what she looks like and I support the SNP and not the Lib Dems, why would I know that if Nick had not trotted her out for politically convenient photo opps. Let’s face it she is a bit of a dolly bird and will get the eye candy vote as well as making him look like a stable family man. So don’t try to pretend that Nick does not use his wife at least for political purposes that just wont wash.

As for the street parties being only people you know. Do you know everybody in your street Caron? I don’t. And in some streets I know a street party would just be another excuse (if one were needed) for people to get pissed and the consequencese of the state sanctioning of that are far more scary than anything, I imagine, Nick Clegg has ever seen this side of a burning greenhouse!

I know what Moira Salmond looks like and I support the Lib Dems not the SNP.

And the Daily Mail had a phase of following Miriam around the place, including to a lingerie shop, so a lot of people know what she looks like.

I think we can agree whether you know what Moira looks like or not that Alex does not use her for political photo opps or to pose as a family man. While I know that Nick does as I have seen him doing it. I generally do not take any interest in what political spouses look like and so I don’t by and large know unless they are at some point shoved in my face. You may be different! I am sure if I wanted to know what Moira looks like I can google a picture of her. But I don’t.

I have never read the Daily Mail and take no interest in gossip and tittle-tattle and so would never have been likely to come across her pic there I can assure you. The only place I would have been likely to have come across her was on the serious news and the only reason I can think of for her to be featured there was because Nick wanted her to be. QED. Has she ever been on the stage at your party conference?