So, after my mother of all blog rants about Yes Scotland portraying its Twitter followers as supporters, and its son, in which I told you that they had at least partially climbed down by altering their site, there have been more developments today.

Last night they altered the wording near the photographs to read that they were followers on Twitter and Facebook. Today, in a further climbdown, they have removed the words "Powered by people o'independent mind like you." They've also changed the wording to "Already thousands have followed Yes Scotland. Here are some of them."

While yesterday's statement from Yes Scotland had an element of bluster about it, their latest is at least a little more humble:

YesScotland.net is an organic site which is constantly evolving and improving to keep up with demand and great ideas as it is powered by the people who use it. We welcome all feedback and are constantly striving to improve the site.

As it happens, I don't think they've gone far enough, even with their latest improvements. I won't be happy until they are only including the photos on their page of people who have in some way actively signed up to support them, joining the website directly or signing the Declaration of Cineworld. I still think it's a bit misleading and could lead to confusion as it is.

This has been getting some coverage across the media, too. First of all there was the Scotsman article. Then the STV website did this report which has an interview with Yours Truly.

And finally, with a bit of a melodramatic headline, I wrote the whole thing up at Liberal Democrat Voice. I tell you this more than anything as an excuse to show you what Lord Bonkers tweeted about it. Made me howl. 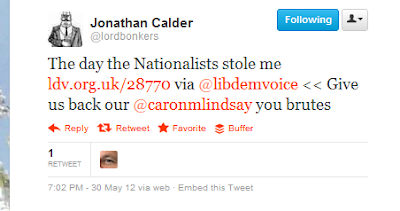 It's good to know that should I ever be banished to a cellar in Brute House (the First Minister's residence for those of you south of the border), that Jonathan would come to my rescue.

And, finally, and I'm really sorry about this, Kate, it seems that Yes Scotland can't even keep their actual supporters happy. There are clearly gremlins in that Nation Builder software, as Kate Higgins tweeted earlier:

>Yes Scotland had an element of bluster about it,

Have all the celeb tax exiles promised to come back home in the event of victory, yet?

And I'll stop there it'll cause a spit-spot-spat.

SO, it now says you have 'Followed' YES Scotland.
Have you not?
That's outrageous! If you've not followed the YES Scotland campaign on social media and they claim you have - wow!

It now seems that it has been admitted that that was an error Caron and not as you and Willie Rennie claimed an attempt to “rig” the declaration. How could it be when they fully publish the actual number of people who have signed it? Additionally it seems it has now been rectified, so you ought to be happy. But no you persist in flogging this dead horse for all the mileage you can get.

Why is it that you seem to have such a high bench mark for how the SNP should behave, that does not seem to apply to the Lib Dems, the Unionists or the English Government? You claimed earlier that the SNP had “form” on this by attempting to rig the Scottish consultation on the referendum. I did point out to you that the Lib Dem SOS for Scotland, Michael Moore, had “vetted” the much less patronised English Consultation’s responses for “quality” while a large number of those accepted, “vetted” responses, had been standard answers submitted, en masse, from a Labour website. I asked you if this came under the Lib Dem heading of putting a positive “slant” on things or under the heading of “rigging”. Funnily enough you omitted to answer that one!

There is such a good axiom Caron that goes along the lines of: before you point out the dog mess on your neighbours lawn perhaps you should make sure there is none on your own!